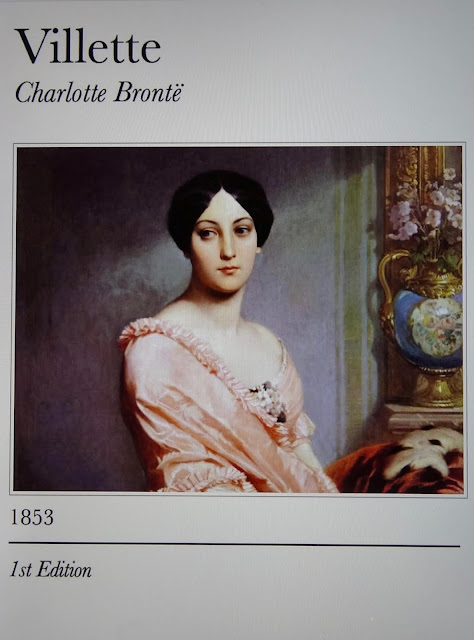 Here is another "Obscure Book by a Famous Author" that I reviewed for our McBride Library Book Club.  Because it is no longer under copyright it is a free download on the internet.

Villette by Charlotte Bronte
Villette is the little known fourth novel of Charlotte Bronte, who is best known for writing Jane Eyre.  It was a re-writing of her first novel, The Professor which was rejected by publishers.
The storyline follows the life of Lucy Snowe, first as an English girl, then as a young woman.  It begins with 14 year old Lucy, living with her godmother because she no longer has family. Also in the home is Graham, the godmother’s son, who is a bit older than Lucy.  The household is then joined by Pauline, a pre-kindergarten-aged girl, who temporarily stays with the godmother because she has lost her mother, and her father must leave her to find work.
The young Pauline seems rather traumatized and very unresponsive to Lucy and the godmother, but warms up to Graham, after he teases her and is playful toward her.  I found little Pauline a bit creepy because her dialogues sounded more like the words of an adult, rather than a very young child.
The teenaged Lucy, leaves the home of her godmother to work as a companion to an elderly woman.  After a few years of this employment the woman dies and Lucy, without family or direction, strikes out alone, deciding to try her fortune in Belgium.
After arriving there, she fortunately secures a job teaching English and looking after the children of Madame Beck, a strong willed woman, who runs a girl’s school in the town of Villette.  Soon Madame Beck, who recognizes Lucy’s value, elevates Lucy to teaching English class in the school, rather than caring for her children.
Lucy, whose character is much like Jane Eyre (honest, very plain looking, decent, but lackluster) is a competent teacher and adapts to the school and Belgium. From a distance she watches handsome Dr. John, who is often called to the school to help ailing students.  Lucy discovers he is strongly attracted to Ginevra, a vane, but beautiful young women, one of the older students, but she keeps his secret.   Lucy and Dr. John’s relationship is initially just that of acquaintances.
When the school closes down for summer break, everyone except Lucy, leaves for fun or family,.  Her loneliness causes Lucy to fall into a deep depression.  One day in desperation, Lucy starts wandering the streets, getting lost in a storm and collapses.
She awakens in an unknown room, which puzzles her because all of the furniture and knick-knacks are familiar.  She is very confused.  Incredibly, the house she is in belongs to her godmother and her son Graham, who surprisingly, also now live in Villette, and more remarkable, it turns out that the man Lucy knew as Dr.John, is actually Graham—what an amazing coincidence.
She slowly recovers in the warmth of her godmother’s home.  She relishes being re-connected with the family and enjoys Dr. John’s company, although he continually talks praise of Ginevra, as Lucy tries to cool his fascination by hinting at Genevre’s flaws, but not totally badmouthing her.   A plutonic relationship develops between Lucy and Dr. John, and in time, Lucy’s feeling toward him turns to love.
Will that relationship ever grow into something more, or will the storyline make a turn in an unexpected direction?  And whatever  happened to Pauline, the young girl from the first chapter, will there be any other amazing coincidences?  I won’t tell, you will have to read the book yourself to find out.
This was not a novel filled with action, in fact I can’t think of anything that might described as action, except for a fire during a play Lucy and Dr. John attend, which caused people to elbow their way out of the theater, causing an injury that Dr John saw to.  The novel dwells on the non-exciting life of Lucy, who like Jane Erye, is a pretty low-key personality.  A lot of the novel dwells on Lucy’s description of the people around the school and her interpersonal relationships with students and staff at the school, and the incidences that happen there, but all pretty low key stuff.
Many critics liked Villette more than Bronte’s Jane Eyre. One of the biggest drawbacks of the novel for me was the numerous French phrases in the book, sometimes whole paragraphs, that made me shrug my shoulders and skip ahead to the next English text, because I had no idea what they meant.  I found all the French quite frustrating, but the story, though slow, began to take an unexpected arc that veered it in a direction I hadn’t anticipated, and that kept me reading to the end.
You can see all my paintings at:  davidmarchant.ca