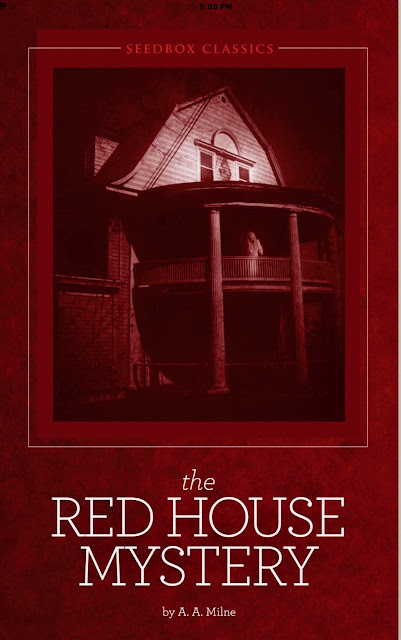 The theme for June’s McBride Library Book Club was “Obscure Books by Famous Authors.”  I took the theme as a challenge;  to try an find something written by a well known author that was little known, (and I hoped, a good read).  I immediately when to the internet for a search and luckily, I found exactly what I was looking for:

The Red House Mystery by A.A. Milne
A.A. Milne is most famously known for writing the children’s book, Winnie the Pooh, and I was quite surprised when I the internet search “obscure books written by famous authors,” and it showed me that he had also written a mystery, and it was considered to be a good one.  I am not a big fan of mysteries, but I was intrigued, and so I downloaded it. I don’t remember if it was free or $.99.
I started reading it and was soon I was sucked into the story. At first it seemed like it would be one of those stereotypical mysteries where a crowd of people are in a house, one is murdered and everyone is a suspect, but this novel took a different tact.
Antony, the protagonist is staying overnight in a small town outside of London, and realizes that his friend Bill is also in the town staying with an acquaintance who owns the Red House.  Antony decides to find the Red House and drop in on Bill.
As luck would have it, just as he approaches the house, a murder occurs, and he enters to find a man frantically pounding on the locked library door where a shot had emanated from, trying to get into the room to see what happened.  Level-headed Antony makes suggestions to the panicky man and together they scramble around the house and are able to climb through the library window to discover a body on the floor.
The body is that of the house owner’s hated brother, who had suddenly arrived back after being exiled for 15 years in Australia.  There is no sign of the Red House owner, who seems to have vanished.
Antony and his friend Bill (who had been out golfing with other household guests), jokingly take on the roles of Sherlock Holmes and Watson, and try to solve the murder.  Unlike most mysteries, where everyone is a suspect until the final chapter, Antony and Bill quickly figure out who the murderer is, and the storyline is about how they get  proof to nail him and discover, how it was done.  There is a nice twist toward the end of the novel.
I just noticed something that confirms the old adage, “You can’t tell a book by it’s cover”.  I see on the cover there is a woman looking out from a balcony, in this novel women, mostly  house staff, play only minor roles.  I guess having a woman on the cover, sells books.

To look at my photo-realistic paintings go to:  davidmarchant.ca