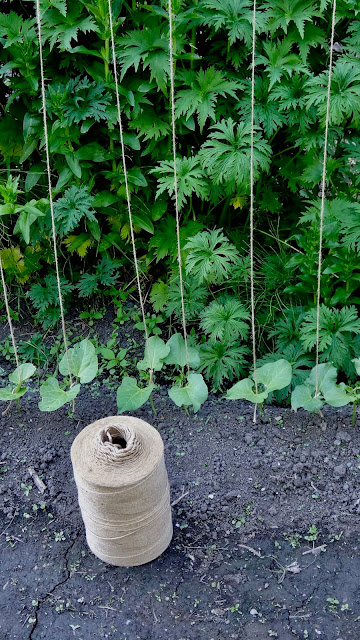 Earlier this year, a neighbor offered me some Lima Beans to plant in my garden.  I like Lima Beans, and didn’t know you could grow them in the Interior of BC, but my neighbor explained that a local Mennonite family has been growing them for years, and had given him some beans for seed.  I happily took the beans and planted them in a row in my garden.
A few days later, after thinking about it, asked the neighbor, just how high the bean vines grew and he demonstrated with his arm about eight feet high (2.4m).
“Yikes,” I thought, “I am going to have to rig up something for the vines to cling to.”  Since they were already planted in a row, a teepee sort of construction would not work, and I considered some kind of wire fencing, but that seemed like more work than I was ready to do, so I started thinking of another solution.
I decided the easiest thing to do would be to put some metal posts in the ground, then string a light net over them.  I bought the posts and some very thin black plastic netting at the hardware store, and went to work to set it up.  Once, I got it set up I realized that the netting was so invisible, that birds would surely get caught up in it, so I took it down.
Joan suggested just tying up each bean plant with a string.  That would work, so I went to the Farm Store to buy some a baling twine, since I also use it for stringing up tomatoes in the greenhouse.  I have never been happy with the twine available for sale at the hardware store.
When I asked about baling twine at the Farm Store all they had were huge big spools that came in lots of two, that was way more than I needed.   When I explained this, Sarah, the owner, thought for a while then said that she had a spool of really nice twine that she had bought years ago at an auction, and used for wrapping Christmas presents.
She offered to let me take that home and use what I needed then return it.  I hated to use her “special stash” of twine, but she insisted, so I brought it home, and used it to string up my Lima Beans.  I have already put the spool back in the car so I will remember to return it to her.
The whole episode made me appreciate the close relationship that people living in a small community have with their local business owners.  This is not the first time they have helped me out, and it’s one of the things I really like, living in a small town.