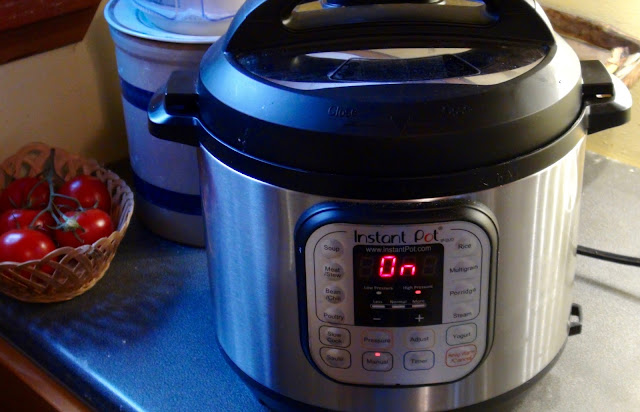 I don’t have any paid advertising on my blog, but every once and a while, I like to comment on things that I really like.  This is one of them.
About a month or so ago, they did a story on the CBC news about a group of engineers that had been laid off at Nortel, when the company went bust.  They started thinking about inventing something useful so they could make a living.  They came up with the Instant Pot, an automated pressure cooker, rice steamer, yogurt maker, slow cooker, etc. etc.  and from the news report, it sounded like it had really become an runaway success with consumers.
I was intrigued and googled it and saw hundreds of video recipes for Instant Pot that people were posting.  Watching the videos convinced me to buy one, so I ordered one online and once I got it, I really fell in love with it.
We already had a pressure cooker, but we didn’t use it much because it always seemed a bit dangerous.  Because the Instant Pot is automated, plugs in, and can be programmed, I have no fear in using it.  I make a lot of soup and that used to mean spending a lot of time at the stove, rejuvenating dry beans, cooking, watching that it didn’t boil over, and waiting around.  With this thing, I just put all the ingredients I want in the soup in the pot, set the time, and walk away.
Because it is a pressure cooker, things get done really quickly, usually in minutes rather than hours.  The timer shuts the pot off after it is cooked and continues to keep the food warm after it is done.  The pressure goes back to normal and all you have to do is open the lid and start eating.  It also has a delay timer, so you can put everything into the Instant Pot in the morning, be gone all day, and it will start up cooking at the hour you set the timer for and be ready for you when you return.
So far we have used it for soups, rice and beans, homemade dog for Skye, making chicken broth from leftover bones, and a few other things.  It is fun and very efficient, and a space saver, because we were able to get rid of a couple of other items of cookware that it replaces.  I read an article in either Mother Jones or Salon about how it had become very popular with East Indian cooks because it allows them to make some of their cuisine that were difficult because they required some kind of fermentation that was difficult.  I can see where it would be very useful for working people who want to throw something together in the morning and have it warm and ready when they come home from work.
Anyway, I really like it and think we will using it more and more as we try new recipes.  You might want to watch some of the videos about it if you are interested.