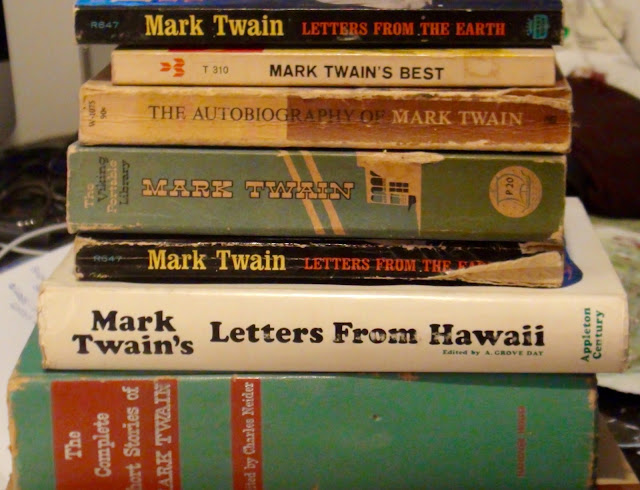 Throughout my adult life if I was asked who my favorite author was I would have answered “Mark Twain.  I have always loved his sharp wit, and sense of humor, but also his dark view of mankind and his political views.  I have not read Twain for a decade, but when the book club at the McBride Library chose the topic “Short Stories” for the January theme, I right away knew I was going to re-visit Mark Twain.  I had lots of old Twain books I have been dragging along through my life and one of them was the “The Complete Short Stories of Mark Twain” Edited by Charles Nieder and that is where I read some of the short stories.  Here is a description of two of them.
In the story "My Watch" Twain tells about a watch he bought that kept perfect time.  Then one day after eighteen months, he forgot to wind it.  Upon discovering that the watch had stopped, he just estimated what the time might be, set it, and re-wound the watch.  He then later stopped in at a watch repair place just to have it set to the correct time.
The watch repairman, said, "This watch is four minutes slow, the regulator needs adjusting."  Twain tried to stop him, saying the time just needed setting, but the repairman refused to listen and made the adjustment.
This being done, the watch began gaining time.  Within a week it was "sickened to a raging fever," at the end of two months, it's pulse was over 150. It left all the other watches in town far in the rear.  The watch was into the snows of November while the leaves were still turning in October.  It sped up house rent and bills needing payments to the point where Twain could no longer stand it.
In desperation, he took it to another repairman, who said it needed cleaning and oiling and the regulator adjusting.  When he got the watch back, it began slowing down time, causing him to miss trains, his meals, he began drifting back to yesterday, then the day before yesterday, and finally into last week and the week before last.
The story continues with more visits to the watch repair shop resulting in more absurd situations.

In "Political Economy" Twain has just sat down at his desk and begun writing the first paragraph of an academic and technical essay about political economy when he is disturbed by knocking on his door.   Irritated by the interruption he goes to see who it is.
It is a salesman trying to sell him a lightning rod to protect his house.  Twain, though irritated by the interruption, listens and is somewhat receptive and tells the guy, "yes". When asked how many points, Twain doesn't know what the guy is talking about so to avoid sounding ignorant he answers, "Eight".  When asked about what kind and is given the choices, Twain, eager to return to his desk, picks the zinc twisted rods, the most expensive, walks back into his house to write.
It takes some time for his mind to get back to the intellectual state required by his paper, but finally he completes the next paragraph when another knock disturbs his flow of thought.  Again it is the lightening rod salesman, who has finished installing the eight rods and tells Twain how beautiful the eight look on his chimney.  The salesman, having realized that Twain doesn't know much and has money, tells him that to really be perfect, the house should have sixteen more rods.
Twain who just wants to get back to his paper, tells him, yeah, just do it.  Later, there is yet one more interruption by the salesman advising even more lightning rods.  The frustrated Twain tells him yes just so he can get back to his writing.
The humor builds to a crescendo three weeks later when Twain and his family are trapped in their house during a lightning storm and the house becomes the target of all the electricity in the atmosphere.
It is a very memorable tale that I remember from reading it forty years ago.