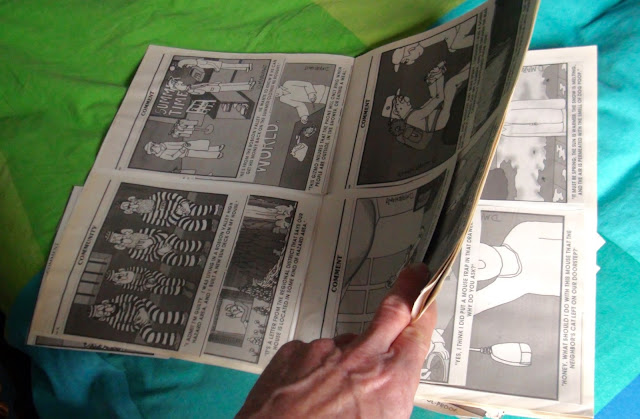 Each week since the 1980’s I have been wracking my brain for ideas, drawing them out, then sending the cartoons to the local newspapers.  Always in the back of my mind is the hope that people will get a laugh and appreciate them.  In the grocery store or other gathering places, people often come up to me and tell me they “really liked the last cartoon,”  or “I taped that cartoon on my refrigerator.”  Those words of acknowledgement always makes me feel good.
I was especially touched yesterday when Joan brought home a scrapbook of my cartoons that Mrs Rosin, an elderly woman, has evidently been collecting and saving for many years.  She cared so much for the cartoons that she had bought a scrapbook, taken the time to cut them out of the newspaper, and paste them into an album.  Her daughter Trudy passed on the scrapbook to Joan now that her mother is in failing health.
While it is certainly nice to have the money I get for the cartoons, in the long run it is gestures like those of Mrs. Rosin, that are more valuable to me.  Like I said I was really touched.