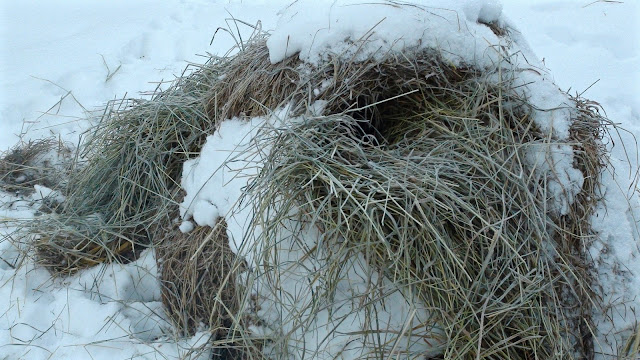 Every summer I cut the tall grass in my paddock and make hay, which I use as mulch in my greenhouse the following summer.  Every winter, the hungry deer find my haystack under a layer of snow and eat some of it.  I don’t really mind if they do, but I was a bit surprised that they did this winter, because the hay I made got fairly wet during the summer and was somewhat moldy.
I guess if you are a hungry deer, you aren’t too picky.  I would think that this has been a fairly easy winter for the deer so far, since there isn’t much snow, and it isn’t too hard to paw away the white stuff to get to the vegetation underneath.
I also expect that deer are like people and prefer a change in their diet whenever possible, so that is probably one of the reasons we see the deer hanging around our place in the winter.  They have several varieties of food on tap:  there is the haystack, the sunflower seeds and peanut butter I put out for the birds, and there is our compost pile with it’s menu that changes daily.