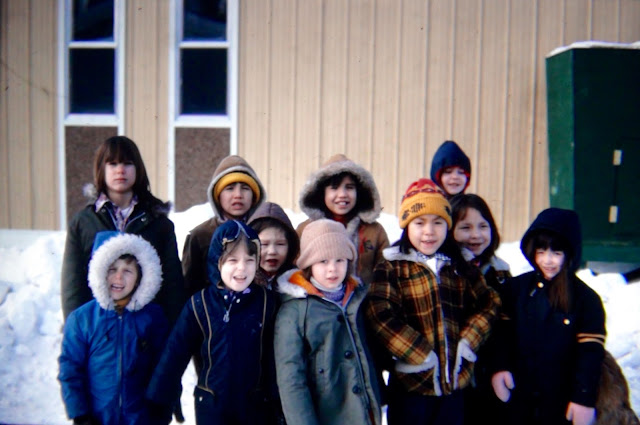 Freezing water has long been a winter fear of mine.  Fortunately it has been many years since our water at home has frozen up, but there has been several winters when Joan and I have had to do without running water for months.
My first experience with freezing water occurred in 1975, when I was teaching in a one room school located on Takla Lake, BC at the Silvacan Resources lumber mill camp. ( Above is a photo of my students standing in front of the school.)  Last night I was pouring through my diary of 1975 and read about the long period of time I had to carry water to the school because its water froze up.  Here is what I wrote about the incident:

On February 13th of 1975 the temperatures plummeted even further, reaching -40F, and in the morning when I arrived for work I discovered that the school’s water had frozen up.  I notified Frank, the camp boss, and I spent a few hours after school with him as he tried unsuccessfully to unthaw it.  I soon came to conclusion that it was likely frozen under the dirt road that ran in front of the school, since the temperature in the crawlspace under the school felt reasonably toasty.
The camp maintenance men worked several days in a row trying to unthaw the waterline.  They used a welder attached at two different spots on the copper water pipes to try to thaw any ice in between,   but they too were unsuccessful in their attempts, and as a result, I had to carry buckets of water to the school every day for the kids to use.  Fortunately if they had to go to the bathroom, they were allowed to walk across the road and use the facilities in the camp’s bunkhouse.
A few days later a broken water main was discovered that was causing flooding behind a couple of the houses.  Once that was repaired, we got the school’s water back, and I was told to just let the water slowly run continually from the tap inside the school to prevent further freezing, and this I did.  I made a grim discovery the next morning upon arriving at the school when I found that I couldn’t open the door.
During the night the water that I had been told to keep gently flowing, had backed up in the drainpipe, which I assume was still frozen, and as a result the school floor had been flooded.  The flooded water had run across the floor to the school’s front door and when it had tried to run under the door, with the freezing temperatures, it had frozen.  It was the ice that had formed there that had prevented me from opening the door.  I didn’t record in my diary how I finally got the door open, but eventually I did.
That first freezing water episode was only a precursor of what was to come.  On February 26th the school water again ceased to flow because of freezing and it would be months before we got it back.  It’s interesting how quickly I accepted that reality.  In my diary I don’t even mention the frozen water at school again until March 3rd, and then the next time was on April 17th, when I report that “..the water is still frozen at school.”
The ice in the pipes didn’t thaw until June 8th.  It seems like that would be a tremendous event, but on that day all my diary entry said was:  “School water finally thawed out and dribbled out of the drinking fountain unto the floor.”
When you live out in the boonies, you learn to do without a lot of things most people take for granted.
View my paintings:  www.davidmarchant.ca