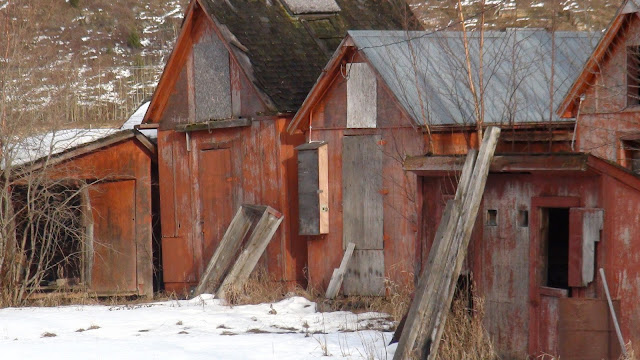 I took this photo a couple of days ago and really like it.  I had walked passed these old farm buildings numerous times as we walked our dog, and I had taken photos of this cluster of buildings previously from the back, the side,  and from the distance, but on this particular day, I noticed the image this way.  I’m not sure why it hadn’t struck me before; was it the way they were lit at that moment, or was it the angle I was seeing the building from?
Whatever it was I was glad I became aware of the image, because  really like this photo.  Barns and farm building are often red because of a couple of reasons.  In olden times, farmers would mix linseed oil with blood from slaughtered animals, or rust, to make a paint, or they could buy the paint and red was the cheapest color.  Later, barns and farm buildings were painted red because it had become a tradition.
These buildings are part of an abandoned homestead just east of McBride.