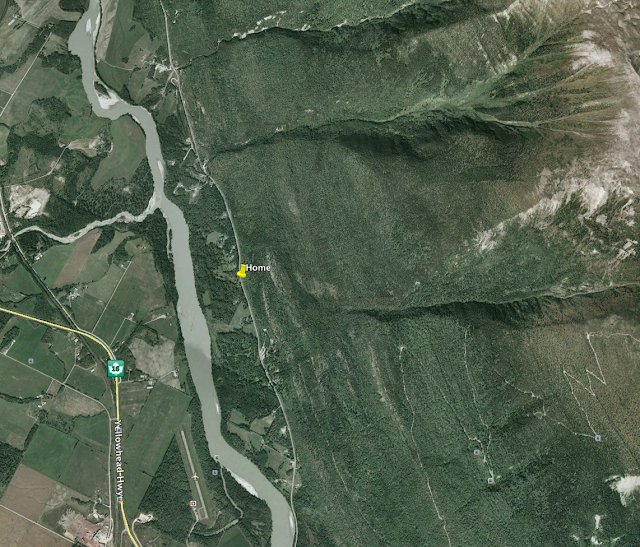 I began working at the BC Forest Service in 1980.  I was the “Draughting Department” in the McBride Forest District.  My job was making and updating all of the different kinds of maps that were used in the office.  There were maps showing the logging cutblocks, the roads, the recreation areas, the types of timber in each area, and maps showing the legal tenure areas for contracts.  As part of my job, I was in charge of the air photos.
I had never come across air photos before and I found them fascinating.  They were black and white photos taken by an airplane as it flew a grid over the country side.  Our district was immense, covering thousands of square miles, most of which was wilderness.  We had filing cabinets full of air photos covering the whole area, showing the mountain peaks, the glaciers, the fields, and the hidden lakes.  The area  shown on each photo overlapped with the neighboring photo, so by using stereoscopic glasses and two consecutive photos, you could see the hills, ravines, mountains, and valleys in 3-D.  You could see individual trees poking up.
Local people were constantly coming in our office to look at their properties and homes on the air photos.  This was officially discouraged, but as a “civil servant” I felt like these people paid for the photos with their tax money, so I always helped them out, and even photocopied (another “No, No”) the photos  for them.  I enjoyed the “power” I had to help out people by sharing the air photos.
While I found these black and white photos fascinating, you can imagine my delight when technology advanced and we began to get color air photos.  I got to submit requests for flights to take new photos over areas of interest for these new, closer to the ground, color photos.
It didn’t take long before technology advanced again and we started to get black and white satellite photos that showed, not the small areas on the ground, but our entire forest district.  These photos were shocking because you could see the hundreds of logged out areas together, all in one view, where previously, you could only see a few at a time on a photo.  When you saw all the cutblocks at once, it became pretty obvious the impact humankind was having on our area of the Earth.
Soon we started to receive color satellite photos.
Of course, now the magic of those photos has disappeared as such photos have become commonplace.  Software like Google Earth (photo above) allows anyone with a computer and the internet, to view “air photos” of any place on Earth.  You can zoom in or zoom out on the image and even see what they look like in 3-D.
I can’t help but be amazed at the things technology has created.