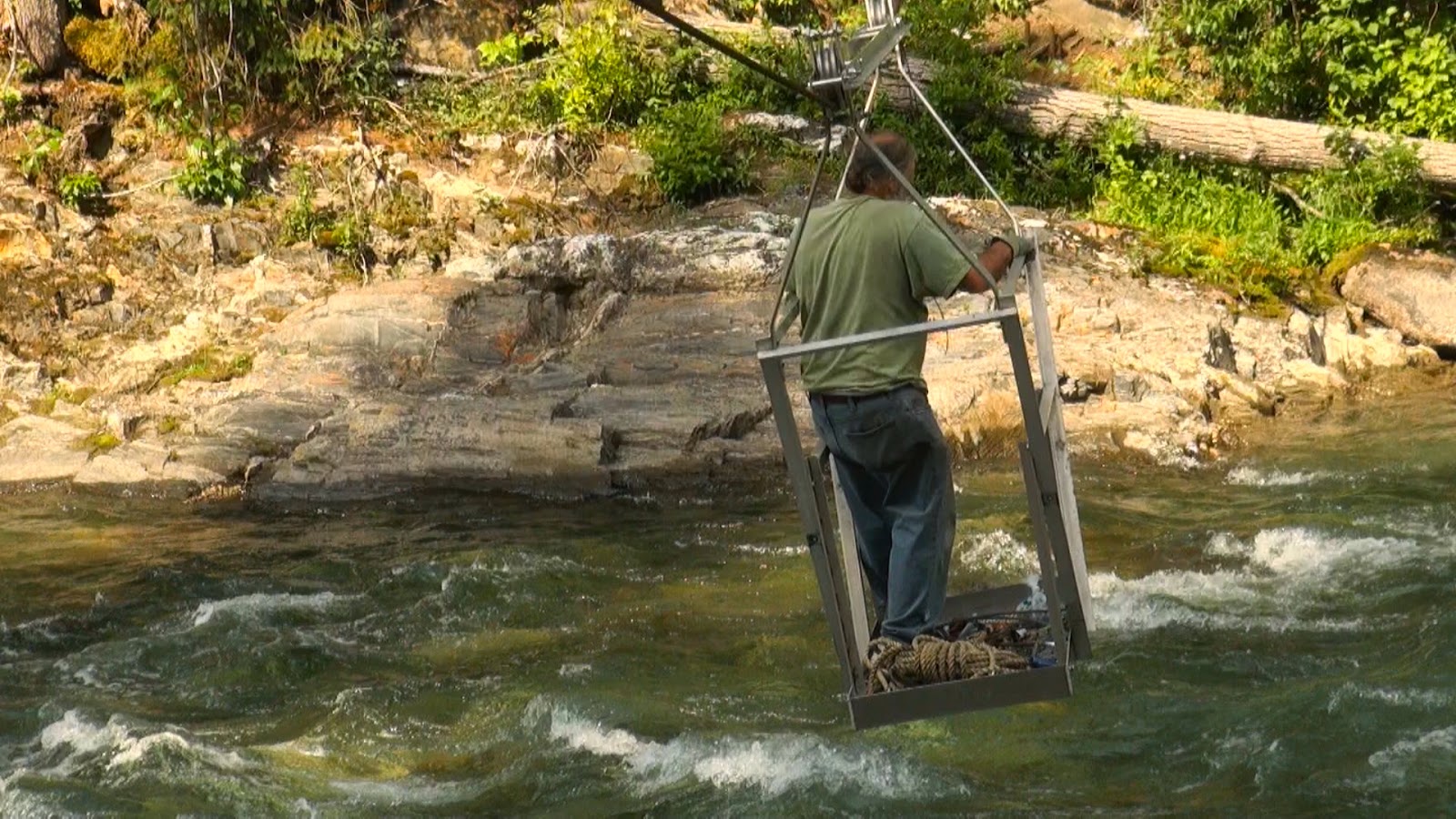 The cable car crossing on the Goat River had been been disabled all summer because of damage to the car during spring high river flows.  Fraser Headwaters had purchased a new floor for the car and the plan for yesterday was to put in the new floor and also to change the anchor on the far side of the Goat River, from a downed tree to secured bolts in rock.  We were joined on the project by members of the Sustainable Living Leadership Program, who annually Canoe down the Fraser River and camp at the Upper Goat River Trailhead (photo below).
First job was to carry the tools and aluminum floor down the trail 3 km. to the cable crossing.  Then the work began on replacing the floor.  That done, Roy Howard gave the newly assembled car a tryout across the Goat River (photo above.)
Once the cable car was deemed safe, several of us made the crossing to the far side of the Goat River to see about anchoring the cable to the big rock that metal pins had been previously been bored into and secured.  We successfully transferred the weight of the cable and car from the downed tree to the rock.  It seemed that things were going our way, but then the problems began.
We needed a few extra tools from the other side and as they were being transferred across to us on the empty car, the cable that supports the car went off the track of the pulley that held it.  In an attempt to get it back on track by jerking the cable, we made an important discovery:  the rock that we now had the cable anchored to, was starting to be dislodged.  It was not bedrock as was hoped, but just a large rock jutting out from the ground.
This situation left those of us on the opposite side of the river, stuck there, since the cable car was no longer useable, and there really weren’t any other trees that we could securely anchor the cable to.  It was getting late, after 5:00, but fortunately for us, one half mile (.8km) further up the trail on our side, there was a ford across the Goat River, that was used by horses and hikers when the cable crossing could not be used.
We hiked up to the ford and had to fight our way across the strong currents of the Goat River.  It was a delicate operation, trying to find secure footing among the boulders and rocks below the swirling cold water, trying to move forward while our legs were being pushed sideways, and although the water was very clear, it was hard to judge the depth, so it was difficult to stay in shallow spots.  In the deeper missteps the water came up to crotch level, but we all managed to make it across without falling, with our pants and shoes full of water.
Once again on the right side of the Goat, we were joined by the rest of our party and we began our 4 km (2.5 mile) trek back to the truck.  Despite all our troubles, we were very fortunate, that no one was on the cable car when it got stuck.  I was glad I had made the decision to keep my pack and camera on the base side of the cable crossing because I wouldn’t have wanted to jeopardize my camera fording the river.  I was also happy to have a big bag of chips still left in my backpack, because I was really hungry as I got back to the truck and ate and guzzled water, the whole long trip driving back to McBride. 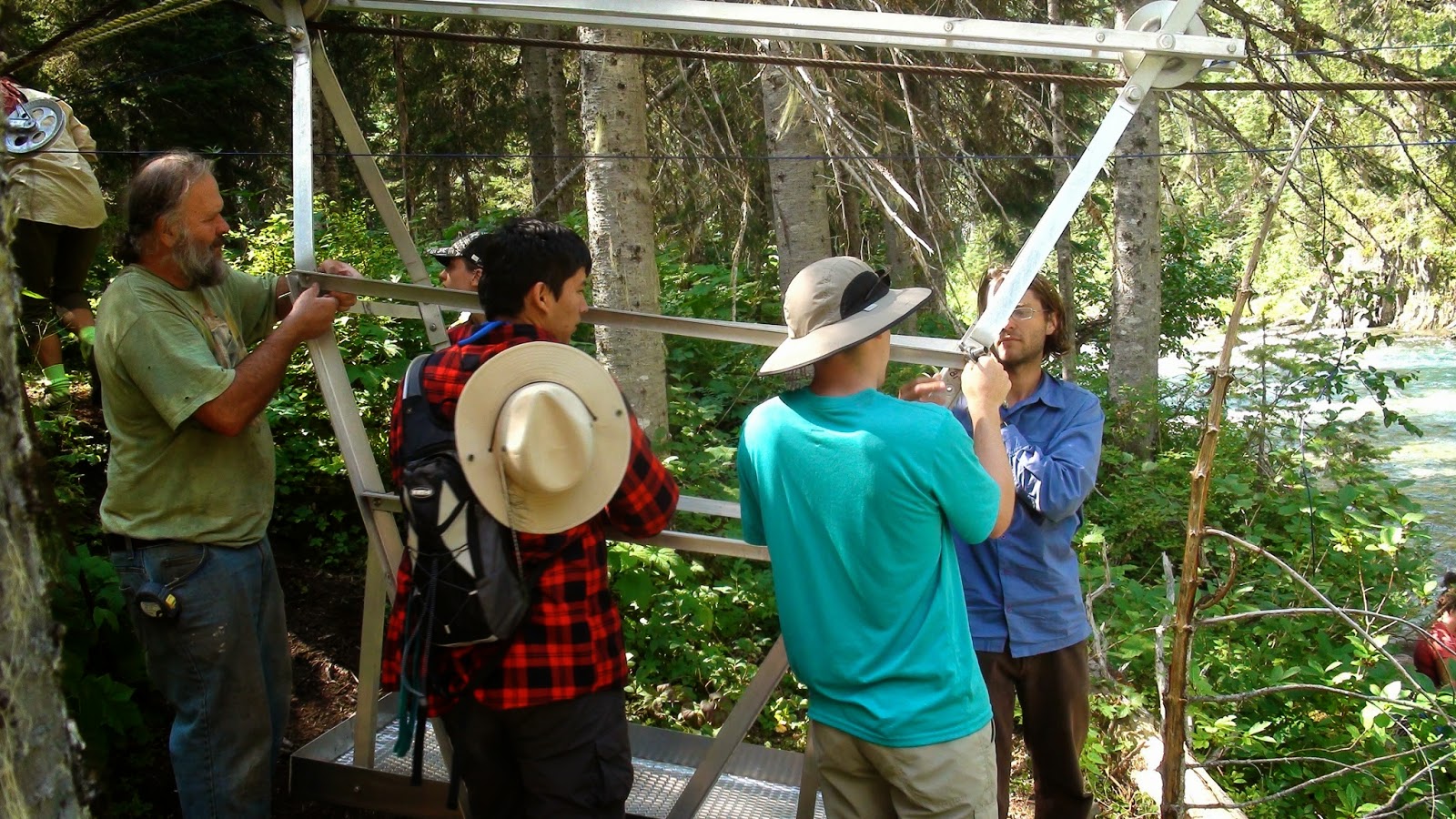 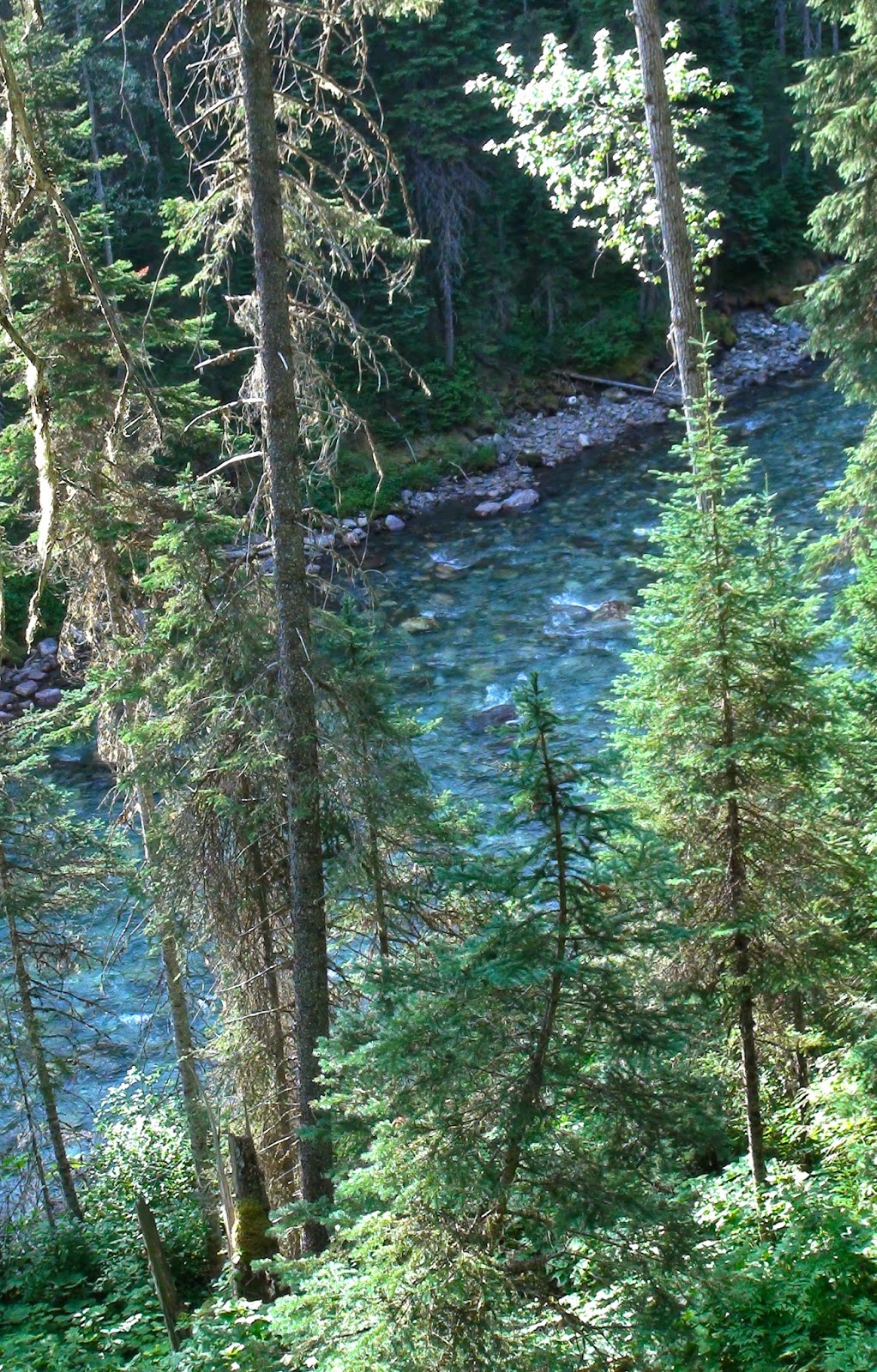