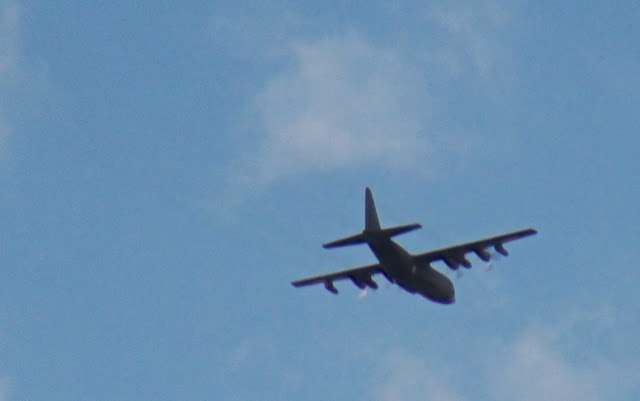 Yesterday afternoon I was sitting at my desk.  I heard an approaching rumbling noise which got louder and louder.  At first I thought it was a big heavy truck coming down Mountainview Road, but it got so loud and close that I realized that it was something much bigger than a truck.  The loud low-pitched rumble overtook our house, at which point I knew it was a plane, but something much bigger than had ever flown over over our house before.  It was a Hercules--a big military heavy-duty transport plane.  While it didn’t land in McBride, for some reason it of circled over the valley.
Because we live in such a remote and isolated area, we don’t see that many planes.  Even though I could say our house is located in the “flight path” of the McBride airfield, and landing planes usually arc over our place as they turn to land at the airstrip, it still doesn’t mean we see many planes.  The average is probably 2-3 planes a month, and those would all be small private planes, and it is only in the spring and summer that we see them, because during winter the tarmac is not snow-plowed.
One small plane I do always enjoy seeing flying over is the old Tiger Moth bi-plane that is owned by our community’s long time doctor.  We see less and less of that bright yellow bi-plane, against the deep blue sky, each year, because the aging doctor can no longer fly it by himself, and has to rely on other pilots to take him up.
I make and sell a calendar each year in which I sprinkle trivia that happened on particular days.  One of my favorite bits of trivia that I like to use is this:  “March 25, 1932-  An aeroplane was seen flying over McBride.”
Whenever I read that fact, I think about how exciting it must have been to see an airplane moving across the sky from an isolated mountain valley without roads (only a railroad) connecting it to the outside world.  I’m sure it was probably the first airplane many of the valley residents had ever seen.  It was such a big deal, that the news made it into the front page of local newspaper.
I felt a bit of that excitement yesterday with seeing that huge Hercules fly over.

I paint every day, see my paintings at:  www.davidmarchant.ca