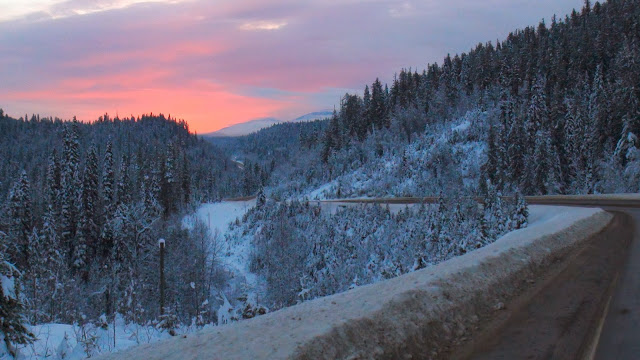 I have mentioned before that every time I have to make the 135 mile (217 km)  drive to Prince George (our nearest large center) it turns out to be an adventure.  Today’s trip was no exception.  The last time we went I got a service done on the car.  I mentioned to the dealer that I was smelling hot oil every time I stopped, and asked if they could check to see what the problem was.
After the service, the woman at the desk told me that both head gaskets were starting to leak oil.  This was something that my cousin had told me was a common fault of Subaru’s.  I asked how big of a deal it was to fix, and was told that it would take 3/4 of a day.  I mulled this information over for a few weeks.
Since a good deal of our driving is on fairly deserted and lonely highways, and I don’t like to take chances with having the car break down in the middle of nowhere, I checked the weather reports to find a day without snow to make the trip to I could get the gaskets replaced.  I made the appointment Monday for the work to be done today.
I had to get up early this morning leaving in the dark a little before 7:00.   Joan always insists that I take her iPhone along in case of an emergency, so I stuffed it into my pocket.  While I am fairly proficient with most technology, I don’t have a cell phone and always feel a bit unknowledgeable when I have to use Joan’s cell phone.
I had gotten out of McBride and was approaching LeGrande, when I heard the phone start to ring.  I pulled over to the side of the road and started trying to get at the phone.  In the winter I always wear a lot of layers.  The phone was in my shirt pocket, which was beneath a sweater, a fleecy jacket, and a windbreaker.
I had a time digging the phone out from under all those layers, but finally succeeded.  As I looked down at the screen I realized that everything was blurry and I needed to get my glasses to see what was going on.  I didn’t even remember bringing any glasses, but I usually have a pair in some pocket somewhere.  This meant searching all the pockets in my windbreaker and the fleecy, underneath the windbreaker.  I cursed as I fumbled with the phone and tried to find my glasses.
Then I heard a voice from the iPhone.  It was Siri, Apple’s ‘know it all’ phone voice.  She said to me, “I don’t understand the term ‘F--K”.
I don’t know why she was listening, maybe I pressed a button or something, but she had heard my cursing and was trying to help.  I couldn’t help but to laugh out loud at the situation.  When I was able to finally read the message, I discovered that the message wasn’t for me at all, it was from our friend Di, who was sending a message to Joan.
That episode being over I pulled back onto the highway and proceeded toward Prince George.  About 45 minutes later, I stopped again and looked back at the sunrise that was starting to color the eastern skyline and took the photo above.
The highway to Prince was in remarkably good condition, so I arrived at the Subaru service centre a little after 9:00.  I went up to the service counter handed over my key and ask how long the procedure would take, and thus began the second adventure of the day.
Jerry, the mechanic happened to be standing there and he told me it would take “about a day and a half.”  I was shocked.  That is not what I had been told initially, and I was planning to drive back to McBride later today.  I told them I had been erroneously informed on my previous visit and I was at a loss as to what to do.  It meant I would have to stay in Prince George all day, sleep in a motel overnight, and hang around half a day tomorrow waiting for the car.  I didn’t like that idea at all, a few hours in P.G. is plenty for me.  I wondered out loud about the trains schedule which travels toward McBride one day and back toward Prince George the next.
Then the Subaru people told me they would go halves on a rental car for me, which would allow me to drive back to McBride today and return tomorrow to pick up the car.  That would be cheaper than motel room and meals, and would allow me to have a bit of productive time at home rather than twiddling my thumbs in PG.  So that is what I did.
I got a rental (they charged me $10 extra because it has snow tires, even though it is the law in BC).  I drove around PG and did what shopping I had to do and then drove back to McBride, where I now sit doing this blog.  I am happy to be back home, but it means tomorrow I will have to again spend most of the day driving up to Prince George and back.

When I am not having to drive up to PG I paint.  See my paintings at: www.davidmarchant.ca