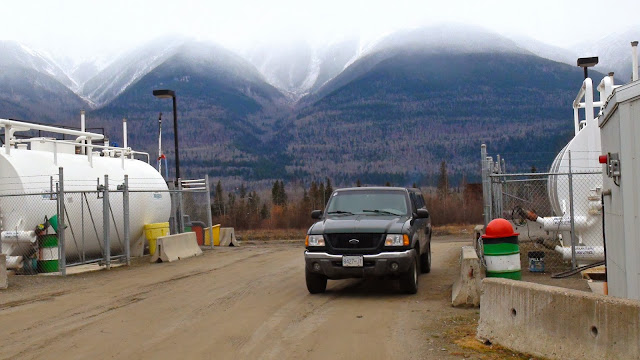 Back in 1977 when we moved to McBride there were 4 gas stations.  This really didn’t make much difference because they all sold gas at the same price.  It did enable you to go to another gas station if one was busy.
Now there is only one, but there is also a “card lock” run by a Coop (photo) where members can fill up at any time of day, get a bill once a month, and get some money back every year.  Gasoline is a pretty basic necessity in isolated rural area like McBride where, there is no bus or taxi service and if you head out on Highway 16 (the only road that will take you to another community), there is no gas station for 100 miles in either direction.
It was distressing to see all those old gas stations close.  There was one weekend when McBride’s only remaining gas station was on the verge of closing, but fortunately at the last minute, the oil company found a new manager, but the incident spooked me enough to join the Coop.
The price of gas has always been high around here, compared to most places in North America.  Presently, now that the summer driving season is over it is down to $1.29 / liter.
Years ago when the price of gas really began to spike, in rural BC there were no gas pumps that took credit cards, and there were many incidences of people filling up at self serve stations and driving away without paying.  The BC government passed a law that required people to pay before getting gas.  This didn’t work out very well in rural areas if you wanted to pay by credit card.
Stations made you go inside, give them your credit card to hold on to, while you went back outside to fill up.  Then you had to go back inside and pay.
A friend of mine did this, but when he went back inside to pay and was handed the credit card back, he discovered that it wasn’t his.  His credit card had been given to some other customer who had already left.  Fortunately it was a local person and not some tourist heading down the highway. So it only took him about an hour out of his day to get his card back.   The capability of gas attendants working at the local gas station was another  reason I joined the coop.
One difference in buying gas in the US and in BC is price competition.  In the states, various stations in an area would have various prices.  In BC it seemed that gas was always the same price no matter how many different stations there were.  One day all the stations would have one price and magically, the next day, all would have the same higher price.
This is especially obvious right before the first summer long weekend and the start of the summer driving season when suddenly the price jumps to a new high for the summer.  It is like they all received a shipment of more expensive gas at exactly the same time.  Amazingly, the government says there is no collusion among the oil companies.
Fortunately, this practice has recently changed in Prince George at least, thanks to Costco starting to sell gasoline.  Suddenly, because of Costco’s cheaper gas, there is a variety of prices in the city, as some stations try to compete with Costco and others still try to flog more expensive gasoline.

I paint every day.  See my paintings at:  www.davidmarchant.ca