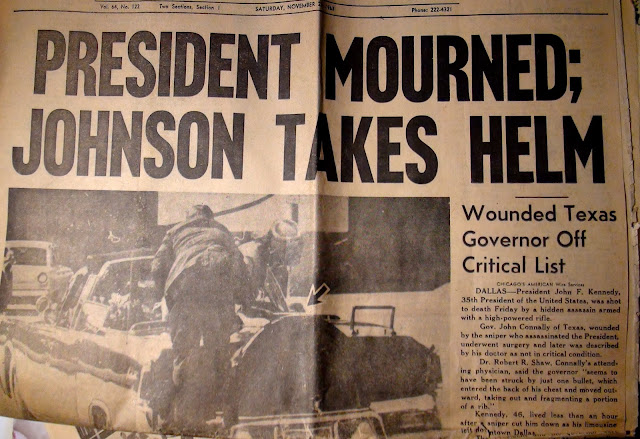 I was 15 years old.  It was a big day for me--No classes!  As a member of North High School’s Concert Choir, I was among those in the choir who were traveling up the big city of Indianapolis to give a series of concerts in some high schools up there.  I don’t remember anything about the concerts, but I will always remember that when we arrived at one of the schools ready to give an afternoon concert, we were told by some of the students who were there that President Kennedy had been shot.
I didn’t believe them.  I figured the big city kids were just trying to put something over on us country bumpkins, but as the day progressed, I kept hearing news of the killing from different sources and I began to think that maybe it had happened.  Sometime before we left Indianapolis in the evening,  I managed to buy a newspaper (above) and seeing the news in print erased any doubt in my mind about the event.
During the 1960 presidential election my parents were Republicans, and they had voted for Nixon instead of Kennedy.  Taking my cue from them and being politically naive, I thought myself as a Republican also, so when the results came in, I was disappointed that Kennedy won the presidency, but most of the nation quickly fell in love with the Kennedy, and I too started to admire the man and the freshness that he brought to the office.  I remember laughing at the parody album, “The First Family” by Vaughn Meader, that comically poked fun at the Kennedy family’s personal life in the White House and their unusual accents.
My growing idealism made me support the Kennedy program of the Peace Corps, and the actions he took to try to end racial segregation in the South.  It was a terrible shock to me when he was murdered.  I think the fact that I still have this newspaper shows how much it effected me.  Every time I see the clip of Walter Cronkite, the news anchorman, look up at the clock then try not to choke up as he tells the world that President Kennedy is dead, I still choke up myself.
Years later, after living in Canada for many years, I saw a television show about Kennedy, and was again shocked upon seeing how articulate, witty, and intelligent he was when answering questions compared to the string of mediocre presidents the US had elected at the time.
I have always been touched by a couple of songs that refer to the event.  The Byrds on their “Turn, Turn, Turn” album did a song called, “He Was A Friend of Mine”, and more recently I discovered the Billy Joel song, “We Didn’t Start the Fire” where he frantically lists all the big news events of the fifties onward, and when I first heard him end one of the verses with “JFK blown away, what more do I have to say?” I was really struck, it summed up for me just how crazy the world is.
Even though I am very excited about our new dog, and I would love to talk about her, I felt I had to make some acknowledgement of the event that so shook me and the world fifty years ago today. 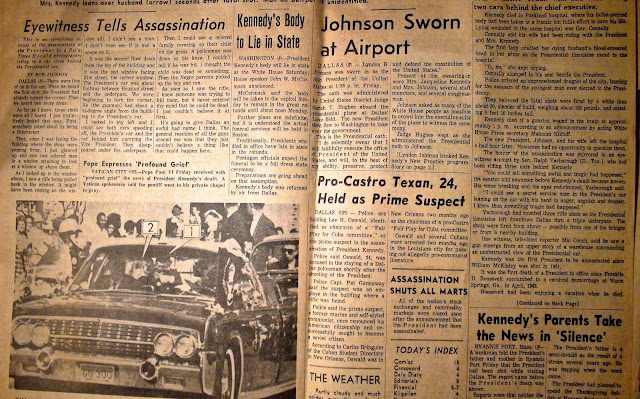