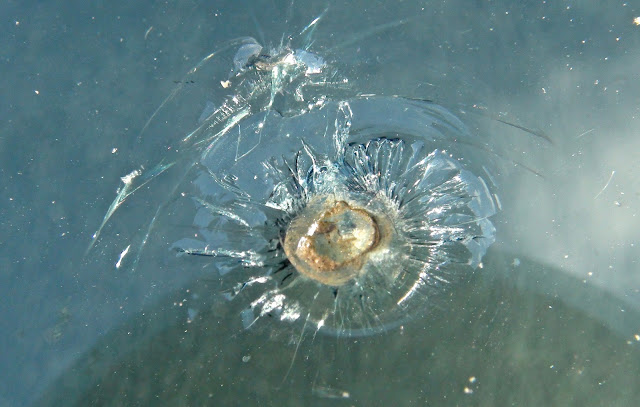 We did some highway driving today.  Driving a interior highway of BC during the winter, makes one really appreciate how essential windshields are.  This morning, within an hour, our windshield got hit 3 different times with rocks thrown up by other vehicles (mostly trucks).  I noticed that Joan started lowering her head every time we got passed.  After a while, it seems like a game: whose first in finding  the chip in the windshield from the rock that just hit.
To improve traction and to speed up melting, the BC Ministry of Highways spreads what they euphemistically call “sand” on the surface of the highways.  It is, in fact, more like gravel.  When the small rocks get picked up by a vehicles tire, they get thrown and fly like a bullet, and can slam into a windscreen.  After several hits, sometimes weeks after a hit, cracks can develop and spread across the whole width of the glass.  One hesitates to replace the windshield because the next time winter rolls around the same thing is going to happen.
While I am discussing windshields, I would like to tell you one of my uncle’s travel stories.  Back in the 1950’s, he was traveling across Saskatchewan during the summer.  He stopped at a gas station or restaurant, and while he was there, some people drove up and got out of a car.  There faces were bright red.  Then he noticed that their car had no windshield, and they had been driving with the wind buffeting them in the face.  It must have been a pretty memorable sight because he still mentions it 60 years later.

To read older blogs or to view my paintings go to:    www.davidmarchant.ca
Posted by Life in BC's Robson Valley at 17:56