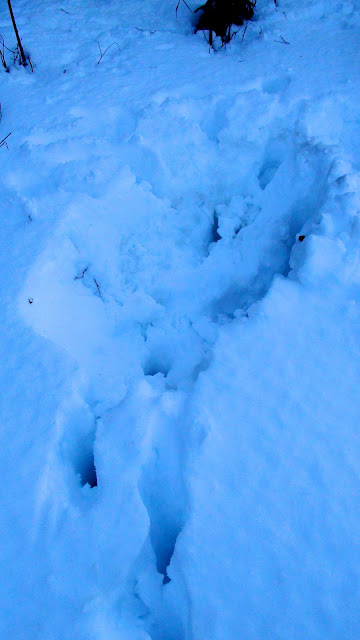 This morning when I was snowshoeing the trail, it struck me that I really hadn’t seen any deer tracks along the trail over the past two days.  We did have a couple of snow storms, so I thought they were probably just hunkered down in some trees somewhere, and not out walking around.
When I got down to the lower field, I did come upon some deer tracks, so evidently, some deer were out and about.  At the edge of the field I came upon a big depression in the snow.  It was about the same size and volume as a bathtub.
There was also some big tracks leading to the depression.  They were bigger than deer, so I suspect it was probably a wapiti (elk).  The tracks were not as big as moose tracks.  The wapiti evidently, had snuggled down in the snow and had a sleep.

Read older blogs and see my paintings at:  www.davidmarchant.ca