Coyotes and an Owl

On our trip down to drop Joan off at the train station, I noticed there was a thin strip of open water on the Fraser River.  I also noticed that on the far side was a coyote standing on the ice.  Then I noticed that there was also a coyote standing on the near side.  That coyote wanted to join the other, but didn’t know how to cross the water barrier.
As we watched, it turned and ran 150 meters down stream and managed to jump the water where it was not so wide.  It then raced toward his mate, who was walking toward the opposite bank.  On the way back from dropping Joan off, I noticed both coyotes were again on the ice and returning back to our side of the river, I guess they didn’t find anything of interest on the far side.
This morning when I went into the chicken house to throw some corn and oats on the floor, out of the corner of my eye, I saw a movement, and noticed, there, sitting on the chicken’s roost was a northern pigmy owl.  These are tiny little owls.  Usually finding an owl in the chicken house is bad news for the chickens, but pigmy owls are only 6 inches (17 cm) tall, and was not a threat to the chickens, which looked giant in comparison.  He was after the mice that inhabit the chicken house.
When he saw I was taking an interest in him, he flew around the coop a couple of times then swooped down and left, using the chickens small door to the outside.

To read older blogs or to view my paintings go to: www.davidmarchant.ca 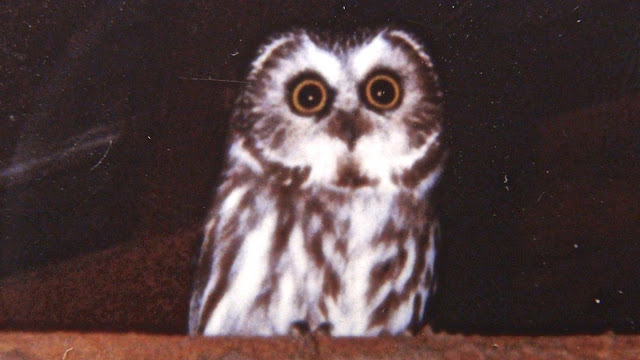