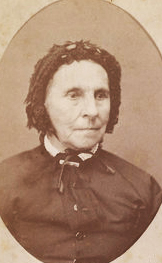 Back in the late 1990’s I became interested in my family’s genealogy.  There were beginning to be some genealogy sites on the internet and I began to delve into my ancestry.  One of the most remarkable things I discovered on my Marchant family line, resulted because of the Civil War.

Together they had a remarkable 17 children, 13 boys, 4 girls (one of which died in infancy).  Arlo died in 1855 and the widowed Eliza remarried to Morris Upright in 1961.

Unfortunately as her boys matured the Civil War began.  Ten of the sons joined the Union Army and fought in the war.  One was killed in action, another was killed when a cannon accidentally went off, and a third son died while in service.  There was some confusion about the family name when they were discharged, some of the sons retained the name Marchant, while other’s ended up with the family name of Merchant.  After the war, a younger son joined the regular army.

Because one’s son was killed in action, she received $8 per month from the government.  She sought no recognition for the fact that she had a remarkable 10 sons that fought for the Union, but in 1879, when she was 74, her situation was called to the attention of Congress, because she asked that Norman, her son who was still in the army after 5 years of service, be discharged.   Congress voted to allow it.

At that time and into the 1930’s, there had been a push to get some kind of national recognition for the only woman on record who had 11 sons in service for the United States, (her second husband was also a Civil War veteran), but no such thing was ever done.   She is buried in Rockford, Iowa.

Below is an old newspaper article about Eliza. 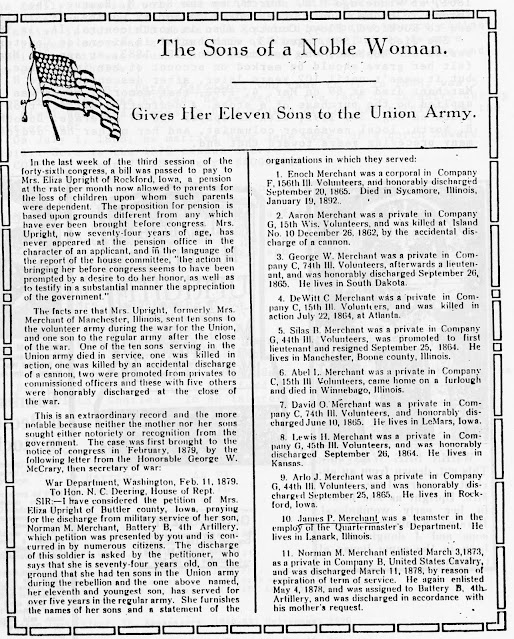