The Giver of Stars by Jojo Moyes 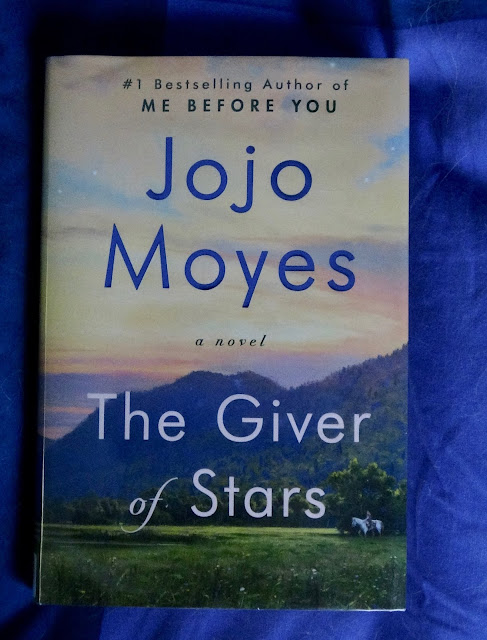 The Giver of Stars by Jojo Moyes
Like the “Book Woman From Troublesome Creek,” this novel deals with FDR’s WPA’s program created to help people living in the isolated hills of Appalachia have access to reading materials, by having librarians on horseback deliver books and magazines.
Alice was a young woman in Britain, who hated the restricted life her family forced her to live, and when a handsome wealthy man and his religious father stayed with them then later returned and asked her to marry, she jumped at the chance.
Thinking they would live in the big city of Lexington, Ky, she was dismayed to find herself in a small Kentucky town where the father and son owned a coal mine.  She discovered that her life had become even more restrained, living in her religious father-in-law’s house, with a husband who avoided consummating their marriage.
In an effort to gain some degree of freedom and escape the boredom of her home life, Alice volunteered to become one of the women horse librarians.  After a steep learning curve of traveling the rough dangerous trails in the wild hills of Kentucky, she grew to love the job and the camaraderie of her coworkers, led by a free living and independent Margery, the team leader.
Stresses and tensions grew in her household, especially by her pompous father-in-law, who both hated Alice’s association with Margery  (the daughter of a drunken bootlegger), and the fact that Alice did not “know her place as a woman” and did not kowtow to the wishes of the father-in-law as head of the household.
The father-in-law covertly worked to denigrate both the library and Margery, its leader, despite the really positive things it had achieved in the community.  Alice began to feel more and more alienated from her husband.
As you might expect things got much more bleak and hopeless until things finally came to a satisfying ending.
Besides the traveling library, this book dealt with racial discrimination, religious hypocrisy, misogyny, rural poverty, and other social matters.  It was well written and well paced, with memorable characters, and an interesting storyline.  I very much enjoyed reading it.

You can take a look at my photo-realsitic paintings at:  davidmarchant2.ca