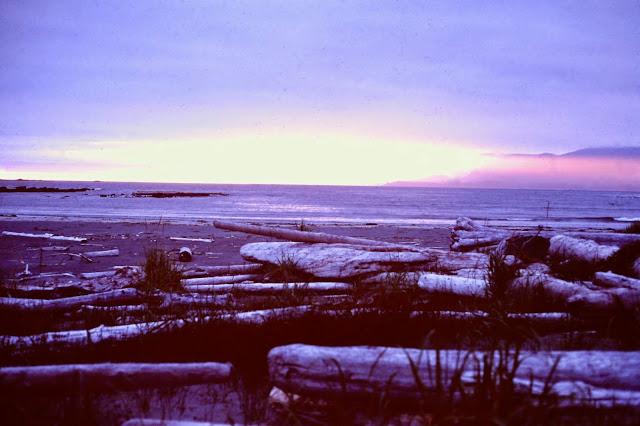 Continued from yesterday’s blog:
After a couple of days exploring the alpine environment we had to hustle ourselves back down for a night’s rest and sauna at the Strathcona Lodge in order to be ready for the following day’s excursion to Escalante Point.
We shared rides to the mill town of Gold River.  There we boarded the famous coastal BC boat, the Uchuk (nicknamed the “Upchuck” by locals).  The boat chugged us through a long narrow strait lined on both sides with forested slopes until we got to Yoquot a hamlet located near to where Nootka Sound  opened up to meet the Pacific Ocean.
After disembarking the Uchuck, our group divided up and boarded some Zodiacs (motorized boats with inflatable pontoons for sides).  It was a cold wet ride, bouncing each time we hit a wave, across Nootka Sound to our destination of Escalante Point.  There we walked to a long crescent-shaped wilderness beach, littered with old barkless logs that had broken loose from logging booms and after being battered by the surf they had finally come to rest on the beach.
The beach was walled in on the land side by a pristine forest of Western Red Cedar and Douglas Fir, that towered through an undergrowth of  impenetrable salal, a leathery leaved shrub that can grow up to 15 ft high.  Salal can grow so thick that many a shipwrecked sailor, having made it to the safely of  land, ended up starving to death because he couldn’t penetrate through the salal growing along the shoreline.
On the west side of the beach was the open Pacific.  On the beach we made use of the tangle of big logs by creating sleeping shelters, a kitchen, and even a sauna, by draping poly-plastic film over the spaces between logs.  (Those were days before concern for all of the plastic killing the oceans.)
Once our camp was set up, we spent a couple of days exploring and learning about beach ecology.  On one of my beach explorations I was thrilled to discover the skeleton of a porpoise half buried in the sand.
After our camp responsibilities and educational activities had ended, in the heat of the afternoon (yes, we had sunshine one day on that normally gray shoreline) some of us went swimming in the cold waters of the Pacific Ocean
At night when the fogs moved in over the beach and ocean and we had settled in our shelters to sleep, we couldn’t escape the loud and relenting foghorn from the lighthouse at Yuquot across Nootka Sound. 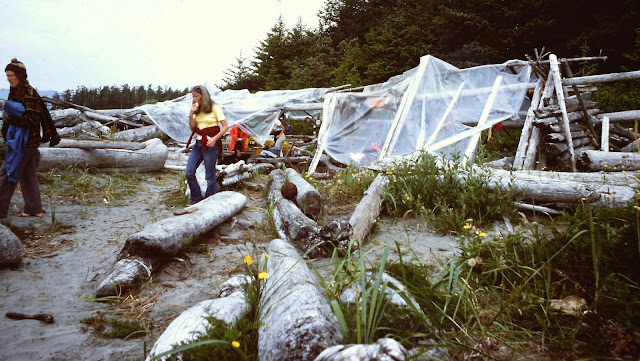 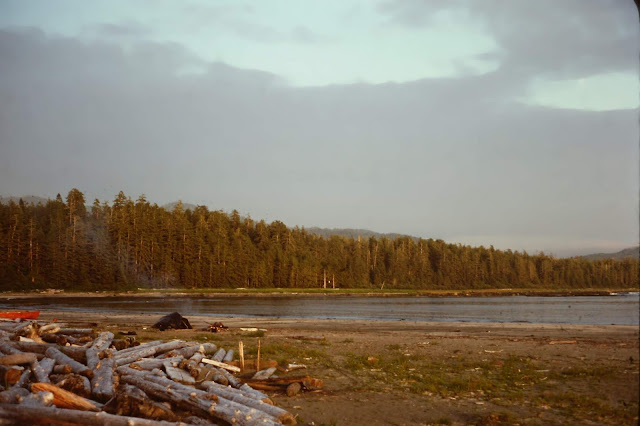