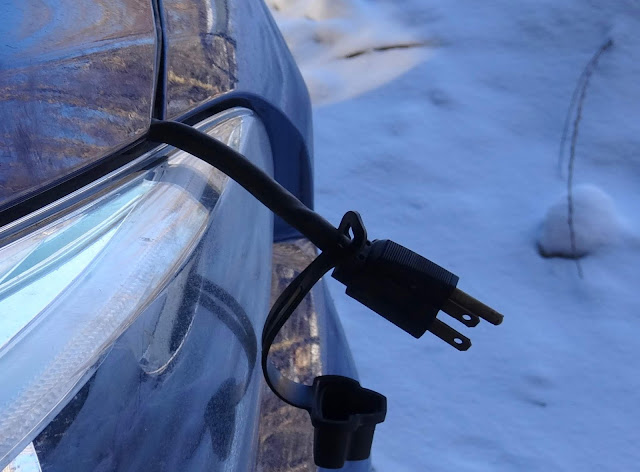 The photo shows the plug for a car’s block heater.

Jan. 19, 1991:
We had just suffered through two weeks of continuous cold temperatures whose temperatures had ranged between -20F (-29C) and -33F (-36C).  It was pretty brutal.  It was so cold that someone in Prince George had reported that they saw a lawyer walking down the sidewalk with his hands in his own pockets.
The cold snap started out badly for me.  After I had gotten home on that first day when it started to go down to -20F, I noticed that the cold water tap in the bathroom was running rather sluggishly and was on the verge of freezing up.  (The bathroom water was a weak link in our water system and was always the first thing to freeze up.)  I figured I had better do something to prevent it, so I crawled down into the crawlspace under the house and plugged in an electric space heater, so that warm air could blow over the waterline leading to the tap.
I couldn’t think of anything else to do; I had the block heater in the car plugged in, I had armful of wood brought in and ready for the wood stove, the electric baseboard heaters in the house were turned up, so I went to bed dreading the thought of how cold it would be the next morning, but confident that everything would be okay.
I was wrong.
The next morning when I forced myself out of bed to check the thermometer, I was depressed to discover it was -33F outside.  We got dressed as quickly as possible, then opened up the front of the wood stove to get that burning hotter.  I fixed a lunch for work, then decided that before I went out to the barn to feed the goats, I should check the car.  I thought I had better start the car to allow it to warm up before heading off to work.
I got in the car, turned the key and heard one of the most pitiful sounds that can befall a commuter on a cold morning:  ERRRrrrr.r..r…r,  then silence.
The engine wouldn’t turn over.  The block heater had been plugged in to keep the engine warm, so the only problem I could think of was that for some reason, electricity wasn’t getting to the block heater.
I went back inside the house and checked the electrical service box and discovered that the breaker leading to the car had been thrown.  I then realized that when I had plugged in the space heater under the house the night before, it had overloaded the electrical circuit which was on the same circuit as the car and it had thrown the circuit breaker.
I reset the breaker.
I decided I would just stay home from work a couple of hours to give the block heater time to warm up the engine.  During that time I fed the goats.  My wife, who was also wondering how she would get to work, called a couple of neighbors to bum a ride.  One of the neighbors was having a similar problem getting their car started, but she found a ride with one of our other neighbors.
At 9:00 I went out to try the car again.  I learned that and hour and a half is not sufficient time for a block heater to warm up an engine at -33F.  I tried again at 9:45 and got a similar result.  I was sure that at 10:00 I would be successful and almost was.  I turned the key and the engine almost caught, so I tried it again, again, it almost caught, again, again.
“Dammit, come on,” I said to myself gritting my teeth, but it was too late, the car battery had just used up all of the power it had.  I was snookered.

I will conclude the story tomorrow.