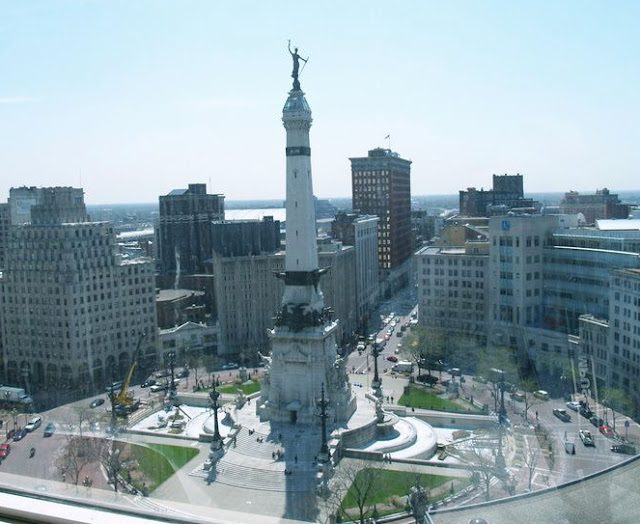 I don’t know if it is true for everyone, but for me, those tiny injustices that occurred to me in my youth have been seared into my memory, and I don’t think I will ever forget them.  One such incident happened to me the year after winning the city 100 yard dash.
When the spring of 1960 rolled around, I was ready for the next track season.  At the district track meet, I again was entered and won both the broad jump and the 100 yard dash, so I was again eligible to participate in the city track and field meet.
That event was to be held on a Monday.  The weekend before, I was invited by my aunt and uncle to join them in a car trip up to Indianapolis to see the sights in the capital city.
One of those Indianapolis sights that we visited on that weekend Sunday was the Soldiers and Sailors Monument.  The monument was basically a tall limestone tower adorned with some military statues.  You could go up inside and up to the top of the 380 ft. structure to the observation deck.  To get to the observation deck you had two choices:  you could ride up an elevator or climb up the 331 steps.  I figured that since I was an “athlete”, I should probably take the 331 steps, and decided that I would use the opportunity to exercise my legs.   I would not just walk up the steps, but I would run up them, at least as many of them as much as I could.
I assume there was an interesting view of the city from the top, there should have been because the monument is just 15 feet shorter than the Statue of Liberty, but I have no memory of what it was, that I saw from up there.  I do have a vivid memory of what happened the next day when I woke up and got out of bed, because I could hardly walk, because my left knee hurt so much, and it was the day of the big city track meet.
This was very upsetting to me, but what could I do.  It was also very upsetting to the track coach, who sent me to talk to the school principal.  I didn’t really know why I was supposed to see the principal or what to expect.  He started out by trying to humor me into running in the track meet, even though I kept telling him my knee really hurt and that I really couldn't run.
He then switched tactics and got all psychological with me.  He started telling me that my knee pain  was all “in my head”, and that I really was okay. He explained that I was just afraid to run because I had done so well the year before, and was just worried I wouldn't do as well this time.
It was all very frustrating for my 12 year old brain, because something had really happened to my knee because of my climb up the Soldiers and Sailors Monument the day before.   I really did want to race, but no matter how many times I told him that, he and the track coach, thought I was just faking an injury because I was afraid.
I did not, of course, participate in the big track meet, because physically I could hardly walk without pain, but the following year when I entered high school, I joined the freshman track team and participated in all of those track events.
The disbelief of my principal was a shock to my naive child brain, that had up to that time, always believed that if you just tell the truth, adults would understand and things would turn out okay.  Obviously, I had been mistaken, and I still vividly remember that encounter 60 years later, especially on cold damp days when I still sometimes get an ache in my left knee.