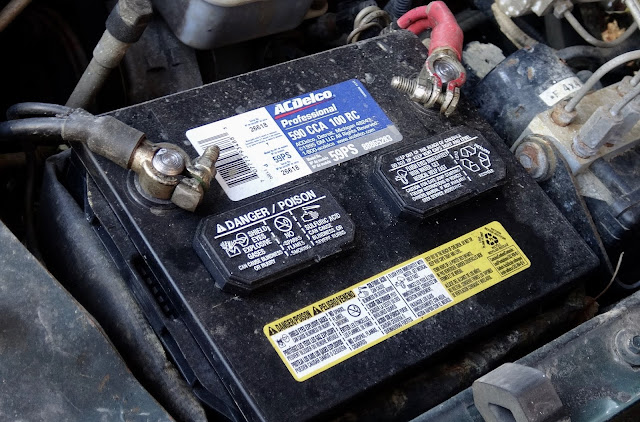 By this time my wife had caught her ride to work and I thought I should probably use the same tactic, so I walked up to the road to try to flag down a ride to work.  The sun was starting to shine over the trees and as I stood beside the road I could actually feel some warmth radiating from the sun, but after about 10 minutes without a single vehicle coming by, I gave up on a ride and when back down the driveway thinking I should give the car one more try.  I decided I should take the battery out of the car and put it into the house so it could warm it up, thinking maybe that might give it a bit of power.
I opened the hood of the car, and with a wrench in my gloved hand, I started to loosen the bolts holding the battery cables.  As I worked, I happened to look up to see our friend Linda go by in her car, heading for town.  “Damn,” I  thought, “I could have caught a ride with her,”  but that ship had already sailed.
Two minutes later as I was lifting the battery from the car, I heard the sound of another car going by—my neighbor, who had evidently had more luck getting his car started than I had.  I had forgotten that he was still at home.
I was in a foul mood.  I took the battery into the warmth of our house, then called Teresa at work to see if they could get anyone there to come and pick me up.  Teresa told me they would send someone out in a truck to pick me up right away.
I quickly loaded the wood stove up for the day, and walked back up the driveway to the road to wait.  I waited, and then waited some more.  I waited and waited, standing with my face toward the sun.
In the extreme still cold, sound carries easily, and I could hear the sounds of tires on the highway which is a mile away.  It sounded as if the traffic was just behind our house.  I could also hear the sound of trees cracking from the frost.  I kept on waiting.
I watched some chickadees in an alder tree beside our driveway.  I started pacing around and did some toe lifts in an attempt to keep my feet warm.  Finally I heard a truck coming my way on the road in the direction of town.  Finally, I thought.  The first sight of the truck did not give me the thrill I was seeking.  I wasn’t a Forestry truck.
After a long 40 minutes of standing in the cold, the truck came.  Teresa had told Johnny the warehouse man to go out and pick Dave up.  Even though Johnny had already had a conversation with Dave S. that morning, he got in a truck and mistakenly drove 32 kilometers to Dunster (where Dave S. lived) to pick him up.
By the time Johnny had realized he was to pick me up, not Dave S, I was getting pretty cold, but I forgot my misery quickly once I was able to climb into the warm Forestry pickup and finally be on my way to work.
I was able to catch a ride home after work and upon arriving home I put the warm battery back into the car.  The block heater had been on all day, and with yet another prayer, I turned the ignition and amazingly the car started.
I didn’t experience any other trouble starting the car for the remaining two weeks of the arctic weather.  I did constantly check the circuit breakers though.  I had unplugged the space heater under the house and just let the cold water in the bathroom just run constantly at a slow rate to prevent it from freezing up.
Because of this incident, and other bad memories of things that happen in cold weather during other years, I automatically start feeling uneasy every time the weather bureau forecasts the approach frigid Arctic air.