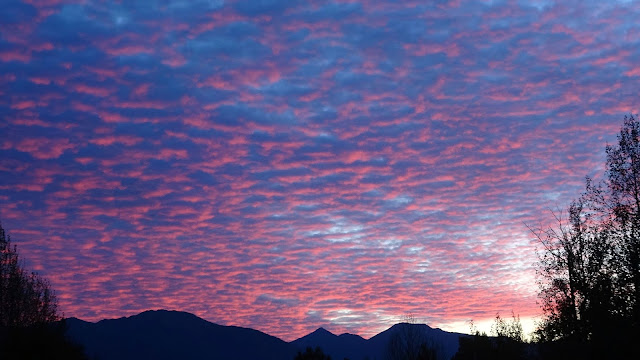 Last night I went out to view this speckled sunset, and got a second treat as well.  For years now I haven’t seen any of the bats that used to dart around over my pond in the evening sky.  I had read many accounts of how bat colonies across North America have been getting wiped out by the White Nose Fungus.  Although I didn’t think that the White Nose Fungus had reached BC, I was pretty concerned because I wasn’t seeing any of the bats I used to see.
However last night as I was watching the pinkish sunset, I saw a pair of bats erratically flying through the sky feeding on insects.  It was very gratifying to watch them once again.  I guess that on all the other evenings I had gone out to look for them, they were elsewhere feeding.