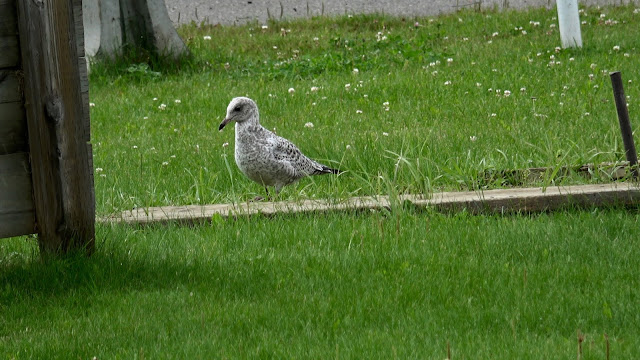 We live in the Canadian Rockies, 600 km (370 miles) east of the Pacific Ocean, so you wouldn’t expect us to see any sea gulls flying around the neighborhood, but every few years, after a big storm rolls in from the Pacific, we see some gulls.  I assume they somehow followed, or were swept in from the storm.   I was certainly bewildered years ago when I saw my first gull in the Robson Valley.  Once I even saw a cormorant sitting in a tree beside the Fraser River, as I drove down the road to town.
This one is what I believe to be a Herring Gull.  We did have a big rain storm the other, so I guess that is where it came from.  These misplaced sea gulls never seem to stick around, and I don’t know if they turn around and fly back to the ocean or what happens to them.

You can view my photo-realistic paintings at:   davidmarchant2.ca