The Awakening and Selected Short Stories by Kate Chopin 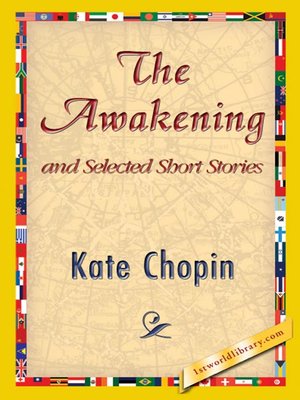 Desiree’s Baby  by Kate Chopin
This short story was one of my favorites from The Awakening and Selected Short Stories by Kate Chopin
This story, as others in the book takes place in the South, in Louisiana.  This one is set before the Civil War.  Three months after Desiree has a baby boy, her marriage and life are changed forever.
Desiree’s husband, with an important family name and plantation, had been buoyed by the birth of a son; he no longer treated the slaves cruelly, and had become a proud father, but all that abruptly changed on a day three months later when a distressed Desiree asked him to look at at the infant, and he discovered that his son’s skin had darkened.
When Desiree asked him what it meant, he replied it meant she had Negro blood in her ancestry.  His love for his wife and son vanished.  Feeling unloved, Desiree left the plantation with the infant to live with her mother.
After she left, her husband cleaned out the house, burning the crib, his wife’s belongings, and was about to burn a bundle of letters she had sent to him during their courtship.  Among her letters he  found an old one written by his mother to his father. In the letter his mother thanked his father for keeping the secret of his mother’s Black ancestry from their son.

To see my paintings go to:  davidmarchant2.ca