The Smell of a Bear 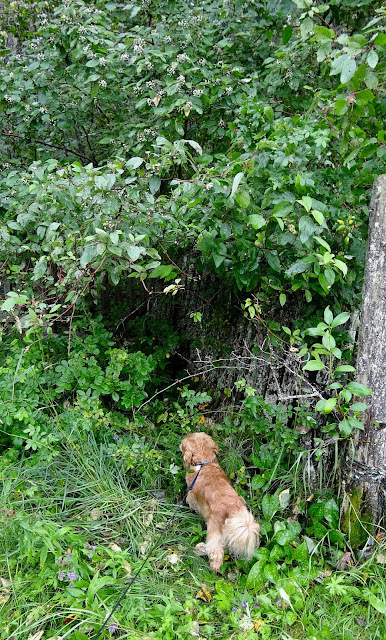 While having a powerful sense of smell is usually considered a good thing, I wish our dog Lexi’s smell wasn’t so good, because it has the potential for getting her into a lot of trouble.  Whenever she catches a scent of some wild animal her brain immediately turns off and she is completely driven by instinct to quickly follow the smell.   As a result we are almost always forced to keep her on a leash, even in our yard.
The other day as we were walking around the yard Lexi caught the scent of a bear that must have been grazing during the night on some of the white Osier Dogwood berries that grow along the fence line (photo above).  After letting out a low growl, her body tensed, and she began pulling on the leash, insisting that the bear scent be followed even though it was 12 hours old.  She just wouldn’t stop pulling even though I firmly told her “No”.  Once her instinct takes over, she turns off her ears and I might as well be trying to communicate with a rock.
Lexi, despite her refined look of a lap dog, still has an awful lot of “wild” in her and we have to really keep her reigned in to keep her safe.