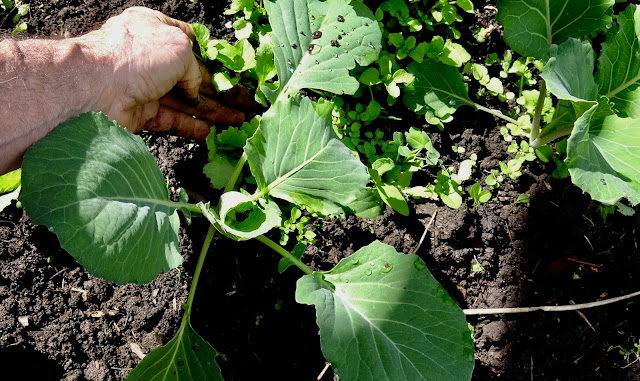 I was happy with all of the rain and showery weather that we have been getting lately, because I knew it would make my garden grow, however I always forget that it will especially make all those weeds in my garden grow and the fact that the ground is wet makes it difficult to get out into the garden to deal with all of those weeds.  I did make an attempt at weeding yesterday.  I weeded two rows of cabbages and the scarlet runner beans.
I remember having to do a lot of weeding in our garden as a kid.  I really hated it, being out in the hot sun pulling out weeds when there seemed to be so many other fun things that I would rather be doing.  Now as an old retired guy, I don’t really mind weeding so much, unless the mosquitoes are bad, but the old body gets stiff if I do a lot of it at one time.  We have a little wheeled seat that I sit on and wheel my way down the row as I weed.


Unfortunately, weeding alway only gives a short-lived reward.   You pull the weed out, but because you can’t get all of the roots, three days later the weed has regrown and it’s hard to tell that you had actually done anything.  I do try to keep on top of the weeds this time of year.  Probably in a month, the job will have become so overwhelming that I lose control of the garden and it then sort of does what it wants.

You can view my paintings at:  davidmarchant2.ca
Posted by Life in BC's Robson Valley at 09:48