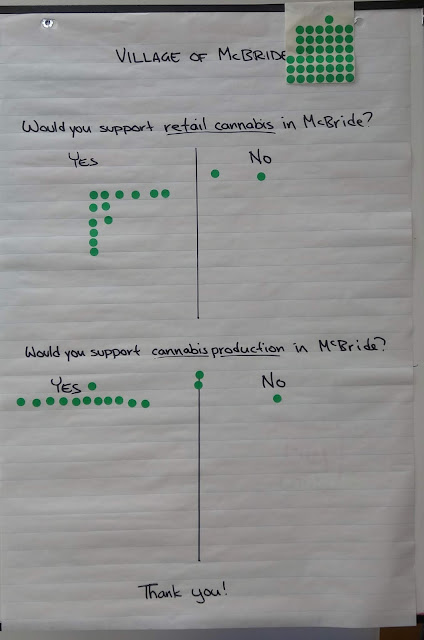 Last July, Canada legalized recreational marijuana.  I have long believed that pot should be legal, so I was very happy when the Canadian government finally took that step.  Since I am not a user, and I live in a small village in BC, I have really seen no difference in local life during the year that pot has been legal.  Canada has been extremely slow in getting pot product out to the public, so I assume most of the people that used pot before legalization are still getting it from the same unauthorized dealers as before.
Anyway, I noticed that there was going to be a forum called “Cannabis Conversations” at the McBride Library last night and so I went.  It was a very interesting event that featured the RCMP (Royal Canadian Mounted Police), village officials, a community health nurse, our Regional District Rep, and the high school principal.  The meeting was set up so the public could ask any questions they had about marijuana and it’s new status.
What really blew me away was the rational, enlightened, and unbiased atmosphere of all concerned.  There was none of the hostile attitudes that used to surround discussions of pot, just people asking sensible questions and getting sensible answers, even from the police.
I asked about where I could get some pot seeds, because I would like to try growing some.  The RCMP said I would probably have to get them at an authorized pot store.  They said although every household is allowed to have 30 seeds, only four marijuana plants at a time could be grown.
The nurse told me that although CBD, an oil derived from cannabis, did seem to help some people who had trouble sleeping, studies showed that eventually it’s effectiveness wore off.  It did seem to really help reduce pain by rubbing it on sore portions of the body.
The principal explained that you couldn’t “overdose” by smoking pot, but you could “overdose” by eating it because the time it takes to feel some effect is so delayed that often when nothing happens quickly, people take more, then more, then when it does start to happen, it can cause rapid heart beat, blood pressure rise, and heightened paranoia.  I put the word overdose in quotes because a pot “overdose”, doesn’t kill people, unlike an overdose of other drugs.
I was curious and asked whether the legalization of pot made the work of the RCMP more difficult, less difficult, or the same.  (There are a lot of new rules around pot now).  They said that it made their job less difficult, because they didn’t have to spend time messing with small infractions of the previous pot laws and could concentrate on more serious crimes.
The most negative thing I heard was that since legalization in Washington state, the most calls to the poison hotline are now about kids getting into pot edibles.  These are not yet legal in Canada, as they are still working out laws about the products.
It was a really informative gathering, and I went away feeling that a new and enlightened era concerning pot use had really begun in Canada.