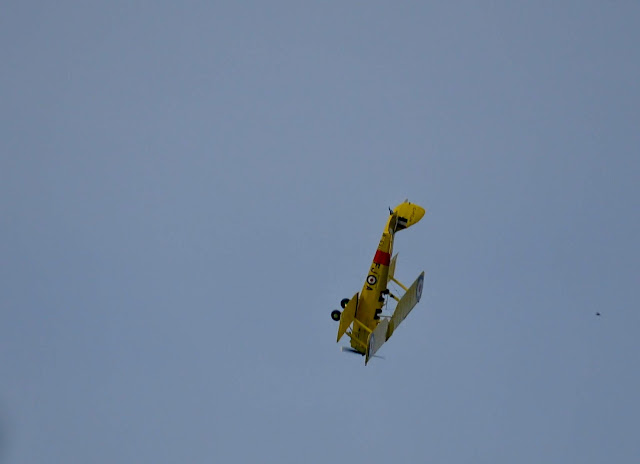 The other day as I was in the carport getting ready to go to Pioneer Days, I heard a familiar sound in the sky.  I rushed into the yard to confirm my suspicions, and yes, it was the late Dr. Cowburn’s Tiger Moth once again flying across the skies of the Robson Valley.
Dr. Cowburn was our local doctor in McBride for decades.  He owned and babied an old Tiger Moth biplane.  It was always a rare treat to hear it puttering around and seeing the bright yellow plane against the deep blue sky.  When Dr. Cowburn died, I had heard that two men who had grown up in the Robson Valley and had since moved to Prince George had bought the plane.  So while I was happy that at least it still had some connection to the valley, I was sad that I would probably never see it again.
I was happy to discover that I was wrong.  It had made an appearance at McBride’s Pioneer Days, and what an appearance it was.  While the parade was noisily inching its way down Main Street, I heard the sound of the Tiger Moth’s engine, and suddenly it was swooping low over McBride.  Not only was it swooping low, it was doing steep climbs, dives, twists, and even loops.  It was an wonderful and exciting addition to the parade.  Dr. Cowburn was never so nervy when he was puttering the biplane around the Valley.
Thank you for those responsible for the memories and the show.