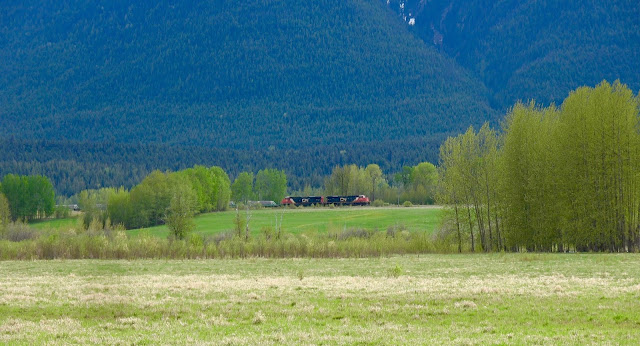 Yesterday while talking to some neighbors, we were told about an elderly, long-time resident of the Robson Valley who has had to move to Prince George for medical reasons.  They said that she had told them that what she really missed since leaving the valley was not hearing the train whistle.  I about choked when I heard that, because I would really welcome not hearing those terribly loud whistles.
We live a mile or so away from the train tracks, but there is a crossing way down below us where the trains are required to blow their whistle three times when approaching the crossing.  Our house is situated on a slope, higher than the tracks which are on the Valley bottom.  Despite all the trees, which one might think would buffer the sound, the train whistle carries beautifully upward and is very loud.  During the summer, when we occasionally open our windows to cool off the house over night, the whistle sounds like the train is just outside our house, so normally we keep the bedroom window closed.
It may sound romantic to hear about the train whistle reverberating and echoing through the mountains, but it is something I would happily live without.