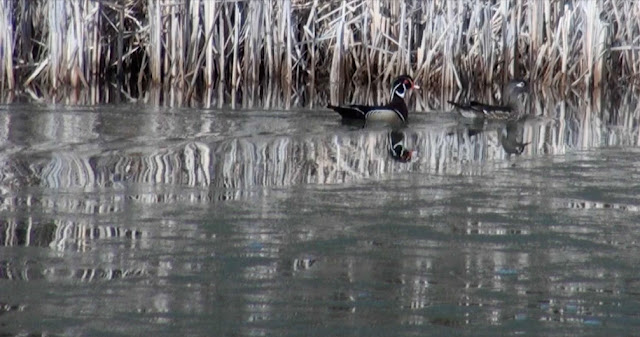 A couple of weeks ago I began blogging about how I made my pond.  It’s purpose was to create habitat for wildlife.  Slowly that’s exactly what it did.
Fortunately, during that first winter the pond did fill with water, and the following spring living things, previously unseen on our property, started making an appearance.  Even though the banks began as nothing but bare clay, ducks appeared.
In an attempt to get some plant growth started, I spread old hay (bedding for my goats in the barn) on top of the dam to hold the moisture in so that grass could germinate.  The ducks soon discovered that my wasteful goats had dropped oats in the bedding, and the ducks had themselves a feast.  I’m sure that encouraged them to hang around, and somehow spread the word.
Among the water fowl that came to the pond, were some spectacular looking ducks.  I had never seen anything like them, so rushed to my bird books and discovered they were wood ducks.  I learned that back in the 20’s and 30’s wood ducks almost disappeared due to heavy hunting, but they had since been making a comeback, and here they were swimming around in my pond.
The wood ducks were incredibly flighty.  I would watch them from the window with binoculars, but even though my house is 100 m. away from the pond, if I went outside and just peaked around the corner of the house, they took off.  Over the years, they became used to me, and I could walk along the dam, and they remain swimming along the far shore of the pond.
They would congregate in the spring, (one day I counted 42 of them).  A few nested in the tree boxes I had provided and the rest flew off to go elsewhere.  They disappeared during the summer, but in the fall, they usually returned to congregate again.
Sadly, the wood ducks disappeared.  I haven’t seen any on my pond or other local bodies of water for about 10 years.  I don’t know what happened to them. 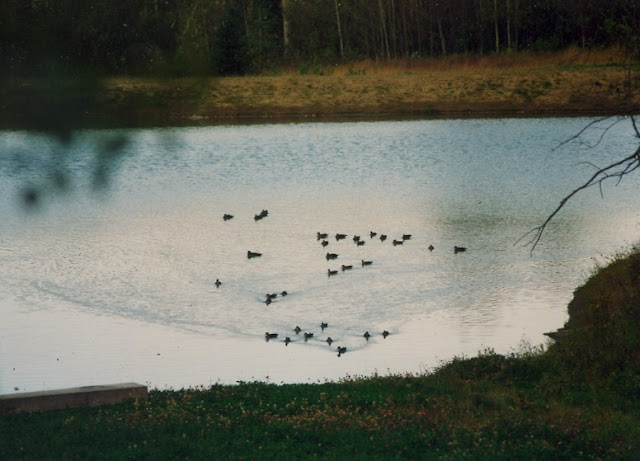