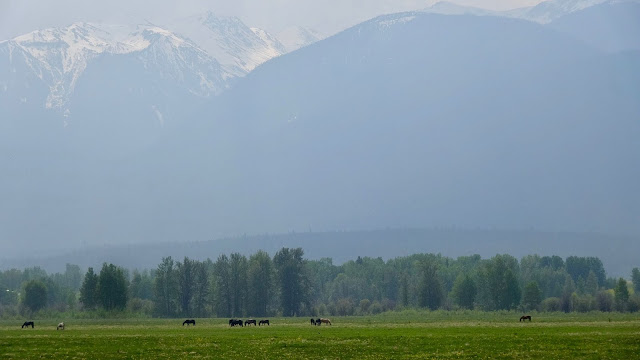 For the last two summers, residents of the Robson Valley have had their mountains obscured by smoke from distant forest fires and have had to breath the toxic smoke fumes for weeks at a time.  Those fires happened during late July and August,.
Here it is not yet June, and yesterday forest fire smoke moved into the valley.  I think this smoke is from the forest fires from the now tinder-dry areas of northern Alberta.  The fires began blazing last week, causing the evacuation is a couple of towns.
Again, like last year, I don’t want to make it sound like I am bellyaching about how rough we have it with the smoke, our situation is insignificant compared to those people intimately effected by the fires.  They are the ones who are really suffering.  My anger is directed toward all those willfully-blinded people who manufacture doubt about what is happening to our planet, and try to prevent any actions that try to mitigate or slow the path that Earth is on.
I realize that they have money in the game, but something a whole lot worse than them losing money, is where our planet is headed, and not for just a few, but for every single human being of the future.
The photo below show the setting sun last night.  It was an intense red, however it’s brightness was too much for my camera to handle, so I have tried to give you an idea of what it was like by using Photoshop. 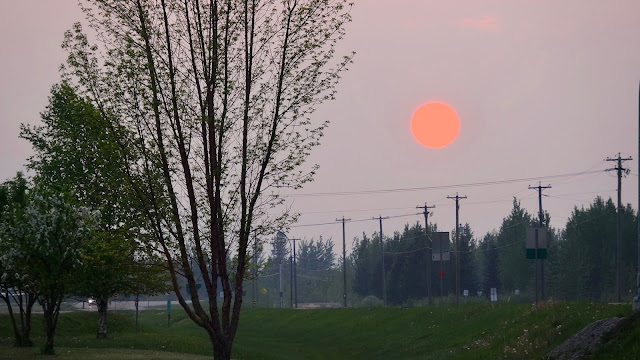 You can see my photo-realistic paintings:  davidmarchant2.ca