Although the Ancient Forest has been designated a Provincial Park for a while now, and has been open to the public, it wasn’t until yesterday that they had the official opening.  A surprising number of people came for the ceremony, and as you might expect, there were speeches by politicians, booths with information, and food, but there were also some interesting things happening in the forest, which I will blog about on other days.
The huge parking lot was full and people had to park in an overflow area and be bused to the event.  A bus had come from McBride with locals who wanted to attend.  The trails that meander and weave through the giant Cedars were crowded and people had to squeeze to one side of the boardwalks to allow others to pass by.
The dark forest of Cedars, ferns, Devil’s Club, and moss, remained an inspiration despite the crowds, and I am always happy to see others share the experience.
More tomorrow. 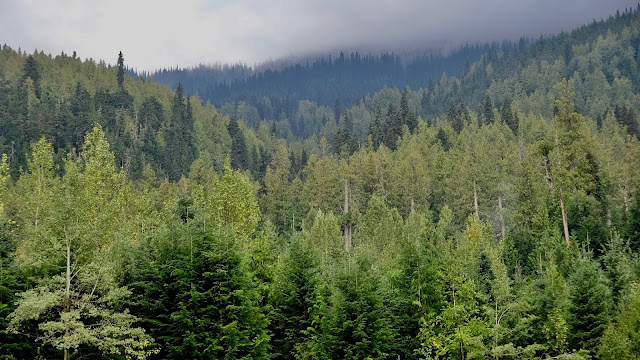