The Last Ranch by Michael McGarrity 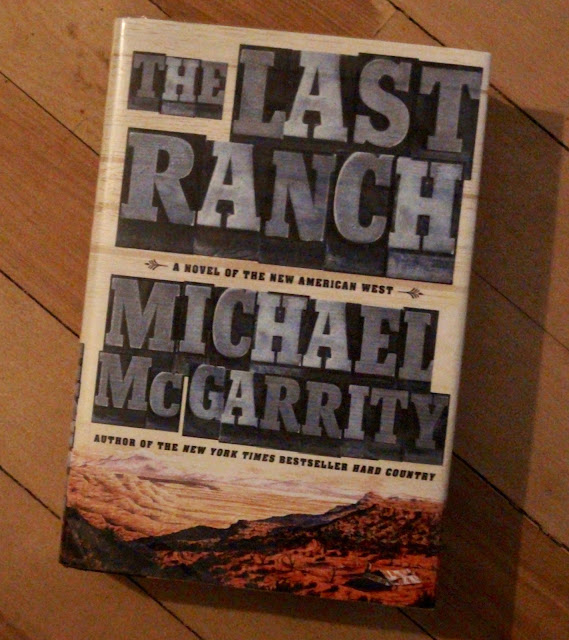 For February, the McBride Library Book Club chose the theme “The Old West.”  I picked out the novel “The Last Ranch” by Michael McGarrity to read.  Although it is set in the West, it takes place in more recent times.  Here is my review:

The Last Ranch by Michael McGarrity
This is the third novel in the trilogy written about the Kerney family that established a ranch in the San Andres Mt. in New Mexico.  The first book in the trilogy, Hard Country was about John Kerney, who first created the ranch in 1875, and struggled with Indian raids, cattle rustlers, and murder, as he tried to eke out a living for his family in the desert-like mountains, as the western frontier closed.
McGarrity's second novel, Backlands revisits the family and examines it's next generation, by following the life of John Kerney's son, Patrick Kerney, Emma (Patrick's ex-wife), and their young son, Matthew.  It spans the time from the Teddy Roosevelt's Rough Riders in Cuba, the First World War, the Depression, and ends at the beginning of World War II, as members of the Kerney family, are forced to survive these external disasters while at the same time trying to maintain a living on the isolated ranch.
The Last Ranch takes up the family's story, spanning the period from World War II through to the Vietnam War.  It begins with Matthew Kearney returning from the war, discharged from the military after losing an eye in the Italian campaign.  He is hoping to cement a permanent relationship with a single mom and her daughter, who is hesitant about marriage, but happy with just living with Matt.
Much to Matthew's dismay, the relationship falls apart after the woman is forced to kill an intruder at the ranch, who is bent on killing her and her daughter as retribution for Matt's causing his imprisonment decades before.  After the incident she is so traumatized that she can no longer tolerate being at the ranch and moves to California.
This leaves Matt floundering, seeking love, but not securing it for any length of time. Finally he meets Mary, the right woman, they marry and have a son Kevin, but life remains a struggle, first with a five year drought in the already arid mountain where the ranch is located, forcing the family into selling the livestock and taking work in the city, while the aging Patrick Kerney, his cantankerous father, maintains what is left of the family ranch.
Then the military, who has taken over all the land surrounding the ranch for the White Sands Missile Range, slowly begins to put it's enormous pressure on the Kerney's to sell them the failing ranch. The family is able to hold off until Patrick, the family patriarch, finally dies, then reluctantly sells their long time family land.
At this point the novel begins to follow the life of Kevin, the son, now living in town, through his high school and university years, his search for stable relationships, and then his entry into the Vietnam War.  Although  The Last Ranch is supposed to the final novel of the trilogy, it's ending sets up a situation which is very similar to the beginning of this novel, so I wonder if this Kerney family epic will continue.
While I have previously read and enjoyed all of the books in this trilogy, I have forgotten most of the storylines in the first two. I remember being quite taken with the first two, but I was not quite as enthralled with this latest, but in its defense, it did keep me entertained and eagerly reading to the end.