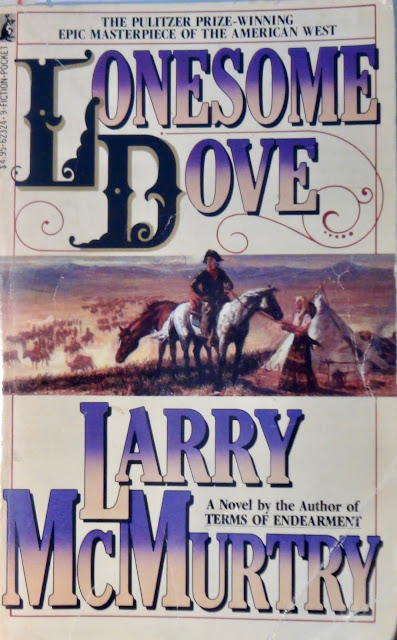 Lonesome Dove, the 1986 Pulitzer Prize winning novel by Larry McMurtry
Many years ago, on my mother's suggestion, I read Lonesome Dove which I really loved and it opened my eyes to other "western"-oriented novels that I had avoided for years, thinking they were just action packed "shoot 'm ups".
I think I am fortunate to have such a poor memory. While I remembered vividly that I was tremendously impressed with Lonesome Dove when I read it, and I remembered how much I liked Augustus, one of the main characters, I had forgotten most of the things that happened in the book.  Re-reading it allowed me to discover and enjoy the novel all over again.
In many ways Lonesome Dove is a carefully crafted and humorous character study which examines the wide range of flawed characters that inhabited the western frontiers of America after the Civil War.  McMurtry is a master of characterization and location, as the films based on his novels, like Terms of Endearment and The Last Picture Show  attest.
I think there was a popular TV mini-series of Lonesome Dove, but I never saw it and didn't know what the title "Lonesome Dove" referred to.  It refers to a southern Texas town, a bleak, dusty, run-down collection of buildings, corrals, and people located close to the Mexican border.  McMurtry really doesn't spend much time describing Lonesome Dove.  He mentions a store, and a church, but the central focus is the Dry Bean saloon, which supplies the cowboys with alcohol, a piano player, card playing, and Lorena, the town's only prostitute, who is the dream of all the love starved cowhands.
The main storyline follows the activities of the Hat Creek Cattle Company, a handful of ex-Texas Rangers headed by a no-nonsense man named Call and his partner, Augustus, who just can't keep from talking.   After hearing about the cattle potential of the grassland of Montana, they slip over into Mexico and steal a herd of cattle and horses from a Mexican rustler, and prepare to herd the cattle north across the continent to the unsettled wilds of Montana. A couple of other storylines arise from actions of the characters and parallel the otherwise monotony of the long cattle drive.  These subplots keep the novel moving and interesting.
One of the things I always notice about McMurtry's novels are the unusual names he gives the characters.  Some of them in Lonesome Dove  are:  Pea Eye, Deets, Dishwater, Call, July, Spoon, Needle, Soupy, and Lippy.  Despite the strange names, McMurtry is able to build realistic human characters with individual foibles out of each of them.
Call, who is a main character, is one of those quiet men who can not express or show their feelings. He has a son, Newt, whose mother was a prostitute, now dead, and although the boy works for him, Call can not bring himself to tell the boy that he is his father.
My favorite and a central figure in the novel is Augustus, who has become one of my all time favorite characters in all of fiction.  Gus has no problem at all expressing his feelings, much to everyone's dismay.  He has more education than the rest of the cowhands and that fuels his nonstop talking.  He enjoys using his talk to get under the skin of his fellow cowboys, but underneath, he possesses a compassion and a humanity that makes him both endearing and memorable.
Upon my first reading of Lonesome Dove one of things that surprised me and struck me as true, was the way so many of the cowboys in the book were terrified of women.  The stereotypical cowboys in most  films and books are macho men, McMurtry's cowboys are painfully shy and lack all social skills whenever they are confronted with a female.   They have spent so much of their lives only around men that women seem like alien creatures and they don't know how to react to them.
This is, of course, a western and so there is plenty of Wild West action in the novel. There are dust storms, stampeding cattle, Indian attacks, and outlaw brutality, but what I enjoyed the most about the novel were the interactions and conversations between the characters.
It is a long novel, 950 pages, and its length allows the reader to experience just about all of those important events and emotions that life throws at us:  Love, hate, fear, regret, birth, death, joy, and sadness.  It is a very human story, written in a humorous and touching way. Lonesome Dove is one of my all time favorite books, and it was as enjoyable the second time as it was the first