The Flesh is Weak 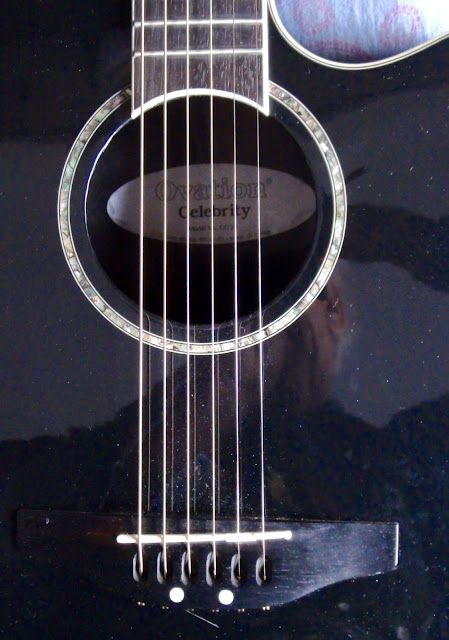 Yesterday morning when the phone rang, the last thing on my mind was buying another guitar.  I certainly didn’t need another one, I have plenty of them already.  I have 2 acoustic six string guitars, I have an acoustic 12 string guitar, I have 2 electric guitars, and I have 2 amplifiers.  I felt content, but it was an acquaintance on the phone, who told me that she had a guitar and she wanted to get rid of it.  Her brother had given it to her as a gift, but she didn’t really like it and wanted to get it out of her small mobile home.  She then said the magic words, “If you want it,I will sell it too you cheap.”
In the afternoon I went over to see her.  It was a really nice guitar, a combination acoustic/electric Ovation.  She also had a tiny amp she wanted to rid herself of.
What was I too do?  Clearly she wanted the things out of her house, and I really didn’t have a combination acoustic/electric guitar, so I bought it and the amp.  It’s always exciting to get something new, but the whole time I realized I didn’t really need it.  My bedroom already looks like a music store.
I took my new guitar and tiny amp to our jam last night, and I must say it was nice just to carry one guitar in, rather than to have to lug both an electric and an acoustic.  I was able to take all of my equipment into the building in one trip, instead of two.
I do realize that we are “possessed by our possessions,” and I try not to accumulate a lot of stuff, but those cursed magic words, “I will sell it too you cheap.” are often to much for me to overcome.


You can see my paintings at:  www.davidmarchant.ca
Posted by Life in BC's Robson Valley at 09:48