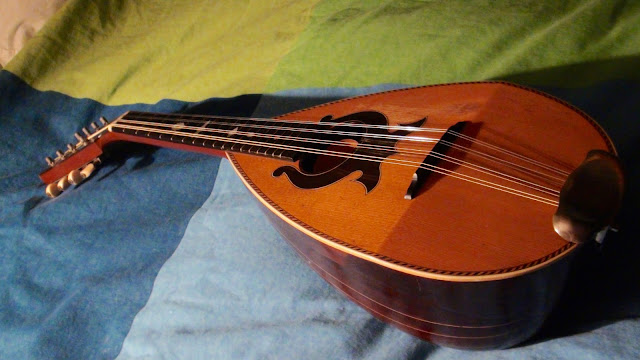 As children, my cousin and I loved to climb the twisted staircase of my grandparent’s house and enter into the dark, shadowy, and cobwebby attic to explore.  There were two objects there that most captured our interest.  During those days of the Davy Crockett mania, the most fascinating object to be examined was the long heavy percussion rifle, after that the object that most peaked my curiosity was my grandfather’s mandolin.
I loved to open the old canvas case, take out the instrument, and plunk around on the out of tune strings, pretending to play it.  We never saw my grandfather play the instrument, as it seemed that he had lost interest in the thing, thus its place in the attic.  Later in life, after the death of my grandparents, my cousin ended up with the rifle, and I ended up with the mandolin.
I brought the mandolin with me when we immigrated to Canada, and for the most part, it had become a decorative object, resting untouched on the bookcase of our living room.  This week that mandolin has become more of a focus in my life, when I heard that the Robson Valley Museum Society was sponsoring an exhibit of old musical instruments at the McBride Library until April.  I cleaned and polished the hundred year old and put on a new set of strings, (since there are no place in McBride to buy mandolin strings, I ended up using some guitar strings to complete the set of 8).
I always thought that the bowl-backed shape of the mandolin made it pretty unique, because I rarely see such instruments.  I was surprised then, when I took the mandolin to the museum to discover that someone else had brought a very similar mandolin (and one that was much more decorative) that had belonged to her grandmother.
At last night’s opening of the exhibit, I got to play a song on grandpa’s mandolin to the attendees.

About my mandolin:
It was made by Isaiah Nightingale in Evansville, Indiana, between 1893-1903.  Nightingale, a luthier, patented the oval-shaped object that can seen in the hole of the instrument.  This is part of a second sound board in the mandolin, designed to give the instrument a stronger and sweeter sound.
Nightingale’s factory, which made both Nightingale guitars and mandolins, was destroyed by fire in the early 1900’s and that seems to have ended production.  There are only a handful of Nightingale instruments known in existence.