It's Always Clear in McBride 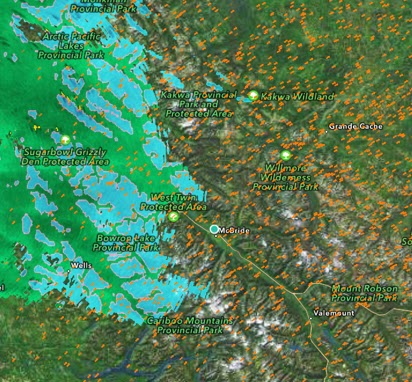 If only that was true.  McBride is that white rimmed dot in the middle of the satellite map above.  All those orange lines show upper level winds, but just ignore them.  That big green and blue area is where snow and rain are falling.  You will notice that McBride has been remarkably spared from all that weather.  At least you would think so by looking at the weather map.
You would be wrong.  The reason that McBride always looks like it is clear on weather radar maps is because the radar never gets past the mountains that surround our little village.  When I captured this image off of my iPad, it was raining and snowing in McBride, it just never shows up on the weather radar because we have no local radar and we are too far away from those places that do.


Take a look at my paintings:  www.davidmarchant.ca
Posted by Life in BC's Robson Valley at 09:29