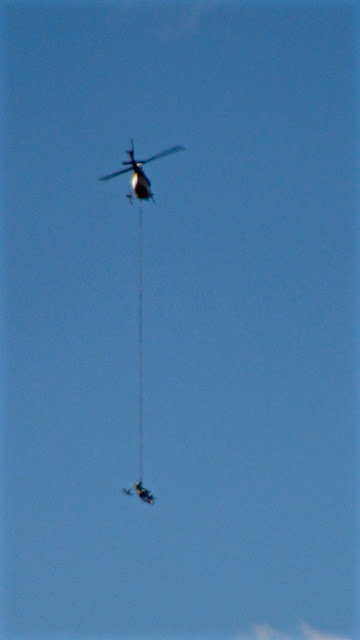 Yesterday Skye and I were walking along the beach beside the Fraser River, when I heard the “Whop, whop, whop,” of a helicopter way off toward the Rockies.  As soon as I heard it I was pretty sure it was a chopper ferrying out a snowmobile, because it is not an uncommon occurrence around the Robson Valley in the winter.
I stared and scanned the snowcapped range, and finally I spotted a small speck in the sky with a smaller speck below it.  The objects slowly became larger.  It flew a wide circle in the distance as it slowly worked to lose elevation.  Soon it was flying right over me as it headed for the airport to drop off the snowmobile.
It was an expensive delivery for some snowmobiler, whose “sled” either broke down way out in the faraway alpine, or who got himself into an area that he couldn’t get out of.  No matter what the cause, having to hire a helicopter at more than $1000/hour to get his sled back was probably something he hadn’t planned on.

My photo-realistic paintings can be viewed at:  www.davidmarchant.ca