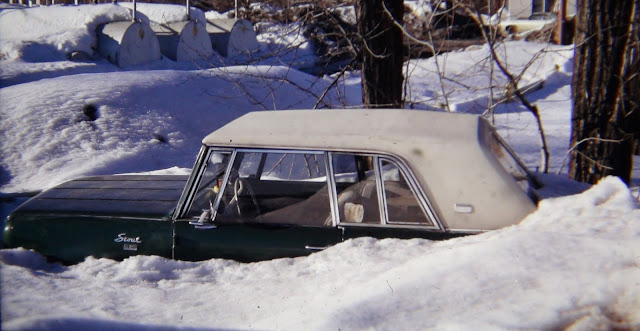 Yesterday I talked to my cousin Dan, who reminded me of one of the stories I used to tell about my early experiences in Canada.
In the fall of 1973, I took a job teaching in a one room school up near Takla Lake in BC.  The school was in a lumber mill camp and there were no roads into the place, so Joan and I had to drive to Fort St. James and fly in to the camp on in a small float plane.  We weren’t sure what to do with our truck, but NT Air (Northern Thunderbird Airlines) allowed us to park our International Scout truck in their parking lot, which we happily did.  We didn’t know when we would be back to get it.
Because the camp was so isolated the only way in or out was either a very slow train, or to fly.  Unfortunately, the “Sched” (the regularly scheduled flights by NT Air) only came on weekday mornings, and so we could never use it and keep the school schedule.  That meant that we had to stay in the camp until Christmas break when we were able to fly out and back in, but those flights were in the mill’s DC3 to and from Williams Lake, so we couldn’t use our truck which was in Ft. St. James.
In March during the school’s spring break we caught the sched to Ft. St. James and were going to drive down to Vancouver Island.  This was on a Friday.  When we got to the NT Air office, the photo shows how we found our car--it wasn’t going anywhere for a while.  We walked over to the house of some teachers we had met and were able to borrow a shovel from them.
I didn’t get the path I shoveled into the truck completed until dark that day, but we still weren’t going anywhere.  The battery was dead and so I had to buy a new one.  Way back then, a battery only cost $30.  When I installed the new battery, for some reason, one of the cables was too short, and I ended up having to get the car towed to a garage to get that fixed.  Since it was the weekend, they couldn’t work on it until the following Monday.  Once the work was done.  We we headed for Vancouver Island.
People are always talking about global warming and it is clear from my diaries that winters were a lot more harsh back in those days.  It has been a while since I have seen that much snow accumulate over the winter.