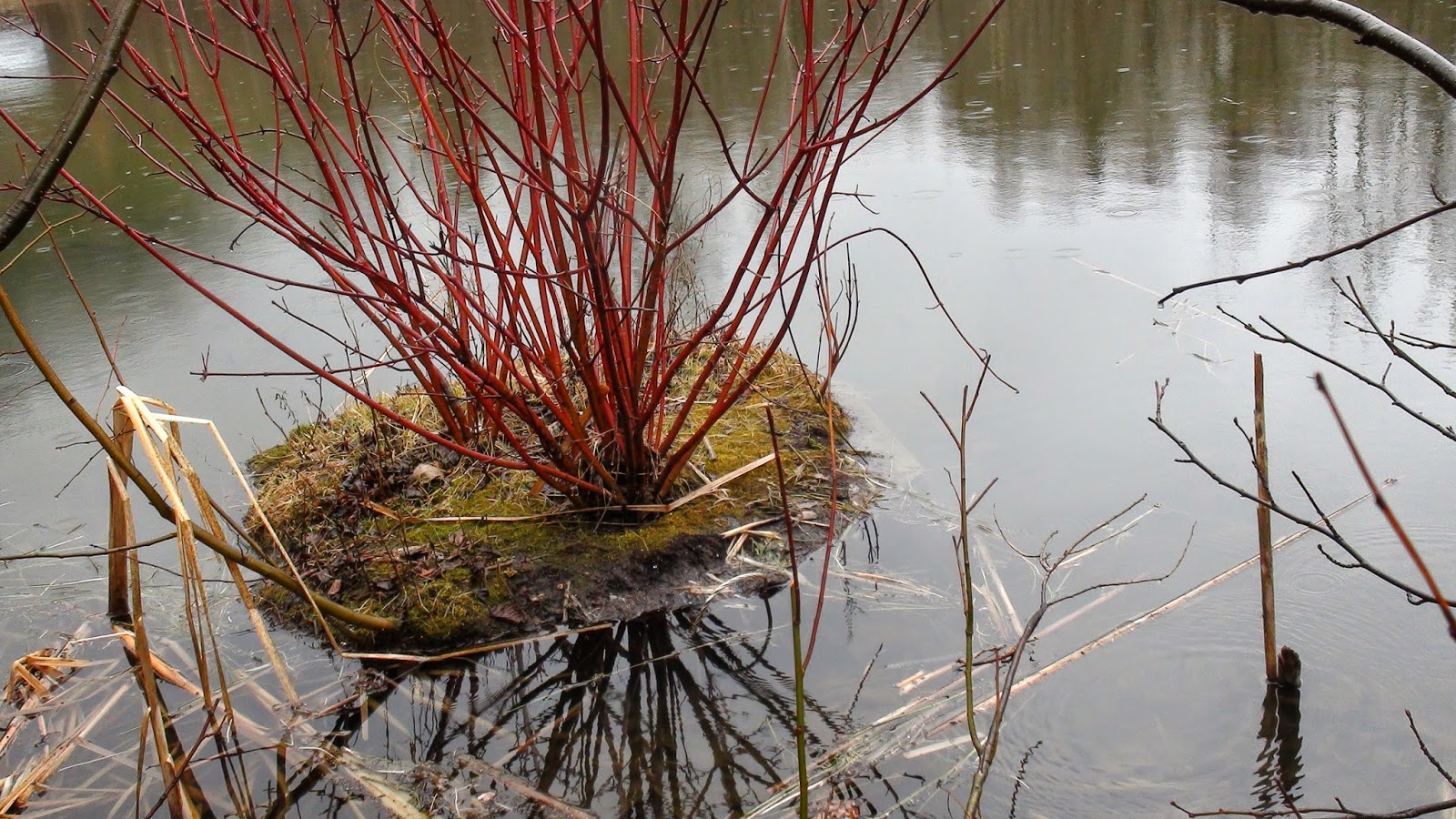 Way back in Neo-lithic times, I decided to build a pond for wildlife.  We had a pasture, but it was fairly moist and grew mostly buttercups, and I thought that it would be nice to have a body of water there to reflect the mountains and provide habitat for animals.  I  used a clinometer to figure out the slope of of property, and plan just how to locate a pond,  then in the fall, I got a man with a caterpillar tractor to come and dig it out.  The pond filled up over the winter.  We have heavy clay soil, so holding water was not a problem.
The wildlife did come to my pond--ducks, dragonflies, and even a muskrat.  I contributed a lot of aquatic plants from local lakes, and even added some red-sided shiners--small minnow-sized fish to the mix.  It was fascinating to watch as wild critters suddenly appeared on the scene.
About five years later, I decided that some of these wild things might benefit from an island in the pond, so I went to work to build one.  I made hexagonal wood frames, which I covered with wood slats.  Beneath the slates, I put a lot of blocky styrofoam pieces, that I had saved from packing around new appliances, because I knew they floated well.  I secured them against the wooden frame with wire fencing and then rolled the finished island, on its sides, out to the pond.
The island was a big success with the ducks and the turtle that was living in the pond at the time, so I was inspired to make another one on each of the next couple of years.  As you might have figured out by looking at the photo of the mergansers yesterday, the ducks start arriving at the pond as soon as there is a bit of open water, even though most of the pond is still ice covered. Because they arrive so early, I felt under pressure, to make and get the islands out there, as soon as I could.
As a result, one year when I had a new island made, I got it to the water, rolled it in, then got into the freezing water myself to anchor it to the bottom.  This, I did just 5 days after the ice had melted.  It was a really cold and breath-taking swim, and when I climbed out, my skin was glowing red.  The anchoring, which was basically just wiring the island to a concrete block sitting on the bottom of the pond, wasn’t a great success.  The islands just get blown around the pond, dragging their anchors from one side to the other.
As you can see from the photo, the sod I put on top of the islands, now is covered with grass and even some bushes and small trees.  Every time I notice the islands, I think of my cold swim.