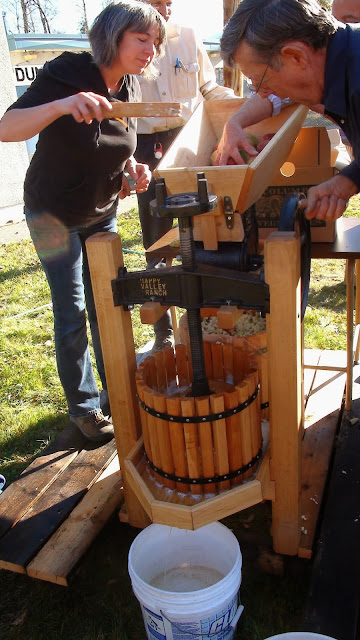 The other day, Dave Milne mentioned that an apple press would be in Dunster on Sunday to grind up apples and squeeze them into juice.  Dave, who enjoys making wine, had ordered several boxes of apples and was having them turned into juice, so he could make apple wine.  Others just wanted the fresh apple juice.
It was a beautiful sunny fall afternoon, Joan and I had nothing planned so we drove out to the tiny hamlet of Dunster to watch.  Jeff, a local man, made the press and had access to boxes of apples, and had hauled both up to Dunster from the Okanagan Valley (a very productive apple producing area in BC), and had taken apple orders from people.  The juicing was already in progress by the time we arrived.
The process was all very low tech and was powered by human energy.  Apples were put into the wooden bin in the top, they dropped down onto a wheel that ground them up.  Harold, there in the blue shirt, is turning the crank to turn the grinder.  The apple pulp then falls into the far wooden bucket which is mostly hidden in the photo.
When that bucket is full, it is placed in front,  beneath the press.  Pressure is put on the pulp, buy turning the big black screwed vertical rod that you see,  that slowly presses down a board onto the pulp which squeezes the juice from the apple pulp which flows into the white plastic bucket. 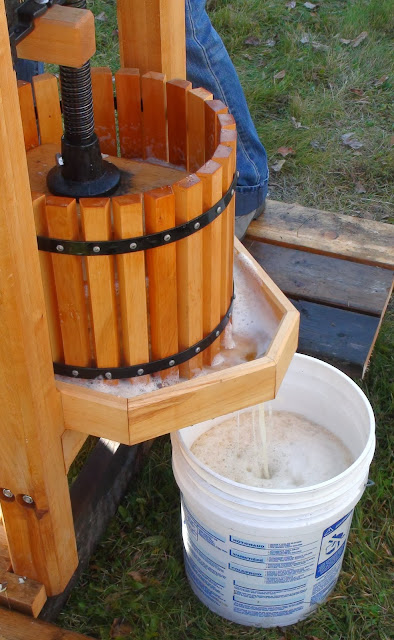 Fortunately bystanders, like Joan and I, were allowed to sample the fresh apple juice.  The delicious nectar was just like drinking a fresh apple.  It was a glorious afternoon, spent with people I like, reviving an ancient process, that made a delicious and healthy product.  I felt fortunate to be able to witness it. 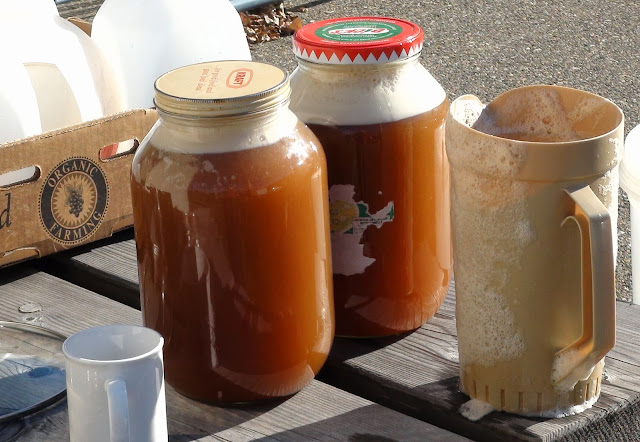