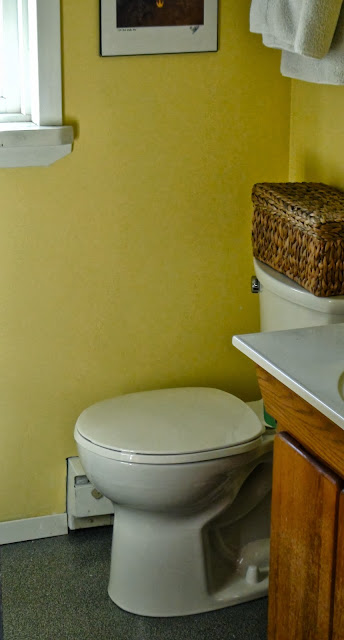 We have a working toilet!  While this may not be big news for most households in developed countries, it is a situation that I was beginning to think was never going to happen for us.  Just 5 minutes ago, I had to go to take whiz and walked downstairs through our dining room, and it wasn’t until I was reaching for the door knob of our back door, that my brain suddenly registered the fact, that I no longer had to go outside, because we now have a working toilet.
This whole long sad ordeal started way back at the end of July, when we finally got fed up with how our old toilet was working (actually we were fed up with how it was not working) and decided to buy a new one.
Our local hardware store in McBride didn’t have any toilets on display, which meant we would have had to order one without seeing it.  So we drove to a big box building supply store in Prince George who had a big selection of toilets on display and began to make our choice.
Because our bathroom is very small and compact, we had to get a toilet that was less than 28.5 inches (72 cm) from the front of the bowl to the wall.  Any bigger and we wouldn’t be able to open our shower door fully.  We were also looking for one with a lot of flush power.
We did find a Kohler toilet that met both of those needs and had a nice design as well.  We bought it, drove it home, and I installed it.  I worked wonderfully, but then we started to noticing that it had a problem in its tank; water often continued to run into the tank, and wouldn’t turn off, or sometimes the tank would quietly and unexpectedly drain, leaving us with no flush when we pressed the lever.
Dismayed, I un-installed it and took it back to the Prince George store.  I wasn’t sure if used toilets could be returned, but they said on the phone that they could, so I gave them the flawed one and they gave me another new Kohler, which I drove home and installed.
This one worked fine for a day, then the first time it was required to do a bit of “heavy lifting” it failed, and from then on, instead of the powerful rush of water, so characteristic of these new breed of toilets, it weakly flushed and the bowl would just slowly fill up.
I thought maybe it just wasn’t aligned properly over the sewer pipe on the floor, so I un-installed it, and checked.  Everything was fine.  The sewage pipe was empty, so that hadn’t been the problem, and it had been centered correctly over it.  I took the toilet outside, I forced water through the toilet  with a hose to see if there was a clog in the “No Clog” toilet, but could find no problem.
I re-installed the Kohler, but again, when I flushed it, it just slowly filled up with water instead of giving the powerful flush.  I was pretty mad.  I was leaving in a week and a half for Indiana from Prince George, at that time would return this one to the store.  In the meantime, Joan and I just had to use the outhouse.  On the day of our flight, I returned the toilet, and decided that on our return, we would have to buy another new one, but it wasn’t going to be a Kohler.
Upon our return, we were tired, but we went to three different stores in Prince George in hopes of finding a toilet.  We failed.  They were all too long or not powerful, or floor models which weren’t complete, so we drove back to McBride empty handed.
I immediately, started looking at the toilets available at our local hardware store from their online catalogue.  There was a wide selection, but again, it was extremely hard to find one that met our requirements.  Eventually, I discovered an American Standard model, Cadet Pro, that seemed to be a likely candidate, but its dimensions from front to wall wasn’t given, and I ended up sifting thought scores of Google hits before I finally found that information.
I ordered the thing, and then we waited for a week.  During that week, we made use of our outhouse with its non-fail technology, and Joan painted the bathroom (several times).
The toilet came on Weds.  It looked good, although it didn’t come with a toilet seat, meaning another trip down to the hardware store.  I was impressed with how easy it was to install, (I have gained a lot of toilet installing experience) and American Standard supplied some really helpful tools.
Amazing, it works!  It is quiet, and the tank is insulated inside, so that the cold mountain water doesn’t cause condensation on the outside of the tank.  It uses very little water, and the seat is higher, which is a good thing for us aging seniors.
What a heavy burden has been lifted from my shoulders now that this ordeal has finally ended, especially now that the weather outside is getting colder and more miserable.  It was such a pain to go outside in the middle of the night.