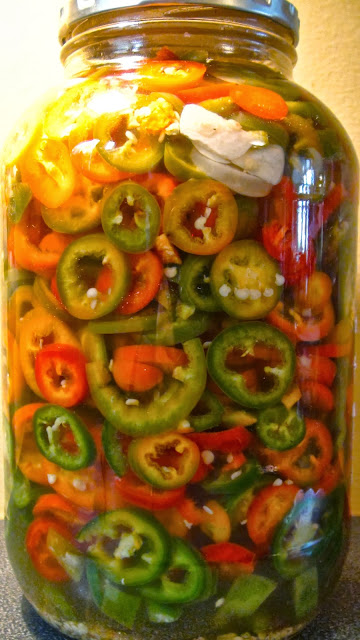 I have been growing hot peppers for years.  There has always been the problem of what to do with all of them.
The thin skinned ones I hang and dry, to be used for spicing up chili.  The thick skinned jalapeno were frozen then used in making tacos.  The serranos (my favorite pepper) are thick skinned, but I slice them, dry them, grind them up, and sprinkle them on my side of the pizza.
This year we tried something different.  I have been eying the big bottles of pickled banana peppers at Costco, so I got Joan to pickled some of our home grown chiles as an experiment.
Some of the peppers we used were quite hot, and we were worried about how they would taste, but the pickling seemed to take the heat out of them.  They are spicy and good and I enjoyed putting them on my sandwiches.
I had a whole bucket full of peppers left after I cleaned out the greenhouse, and yesterday I sliced them up so we could make more pickled peppers.  When Joan cut up the peppers for that first batch the heat from the chiles caused severe pain on her hands for several days later.
Yesterday, I did all the slicing and the peppers didn’t really cause me any pain on my hands and I have learned to keep my hands away from my eyes after handling peppers.
The photo shows my big jar of newly pickled peppers.  After a few days of marinating I will be happy to start using them on my sandwiches.