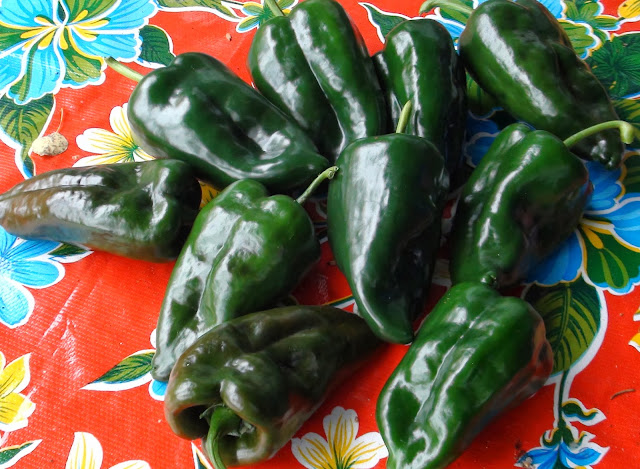 Every year I grow a variety of hot peppers in the greenhouse.  This year for the first time, I grew some poblano peppers.  They are big, mild, and Mexico’s most popular pepper.  I had a good crop, which then left me with the question:  Now what do I do with them?
They are most commonly used in a casserole dish called “Chile Relleno” where they are combined with egg and cheese.  Fortunately, Joan is creative and talented cook, and put together several recipes, and we ended up with a wonderfully tasty chile relleno last night for supper.
One of the more unusual things that has to be done to the peppers before you end up with the chile relleno is that the saran wrap-like skin of the pepper has to be removed.  To do this you have to burn the pepper, then while it is still hot, put it in a closed plastic bag to steam.  I used our grill to do this, but the burning had to be redone because I didn’t let them burn enough.
It was strange to have the raw peppers cooking on the barbecue.  It seemed like I was grilling some delicious new food rather than just burning them so we could strip their skin off, but the resulting casserole was a tasty treat, and I will for sure, continue to grow poblanos next year.

In the photo below you will also see some anaheim peppers on the grill.  I don’t think you really have to burn them, but we had some and so we just gave them the same treatment. 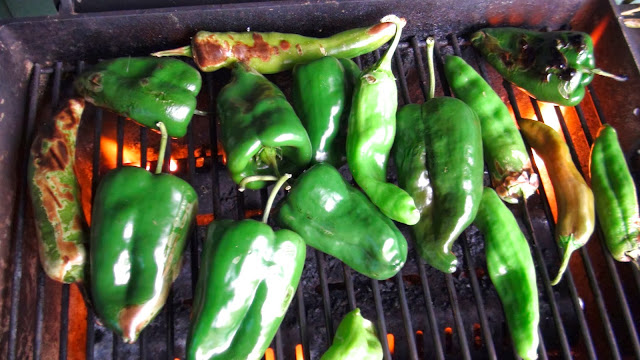