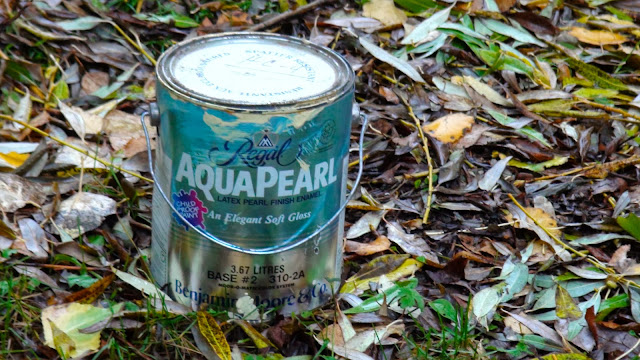 I have difficulty in throwing things away, always thinking that if I save it, someday I might be able to use it.  As a result, I have lots partial cans of paint stacked under the house, where they are protected from freezing.
Since we no longer have a toilet (hopefully, the one we ordered will come in tomorrow) we thought we should take advantage of the empty bathroom by painting it.  The bathroom was sort of a hospital room green color, and at first we decided that maybe a light blue might be our new color, but then we thought about what a cold color blue is and how cold really wasn’t what we wanted to feel when we went in to take a shower during the winter, so we decided to go with a yellow.  We went down to the hardware store and picked up some color swatches of the yellow hues.
We chose a very light yellow color, but when Joan painted on a few brush strokes it became apparent that it was not going to cover the green color in one coat.  She wondered if we had any white primer under the house.  I checked, and we did have half a can.
It was very difficult to open the old can of paint, and I pretty much had to destroy the lid to get it off.  The primer seemed pretty thin, but Joan used it to paint over the green.  She had to paint on the primer twice.   Then she painted another few strokes of our new yellow paint to see what that looked like.  It seemed too light a shade, and we decided that we needed a bit deeper yellow, so we decided that we should just buy new can of the deeper yellow.
Then Joan asked if we had any of the yellow paint that we had used in our kitchen, left over and stored under the house.  I remembered seeing some when I was looking yesterday, so I went down and grabbed it.  We had half a can, and it was about the same shade as the new paint we were going to buy for the bathroom.
“Great,” I thought, “I’m glad I saved this, now we don’t have to buy a new can.”
I opened the old can and began to stir.  The pigments had really thickened, so I had to stir hard.  I would push the stir stick down, through the thick yellow sludge, to the bottom of the can, then move it sideways and try to get it to mix.  I did this for a while, then decided that the paint had too many lumps that would probably never disappear no matter how much stirring I did.  I didn’t trust the old paint, so we decided just to buy a new can at the Hardware store.
I had done the stirring on the kitchen counter and was careful not to slop any paint over the top of the can.  I put the lid back on the can and carried it out and put it on the carport.  When I came back in I noticed about 10 blobs of yellow paint on the kitchen counter right where the can sat, and some more on the kitchen floor, and through the pantry where I had just carried the old can of yellow paint.  I went out side and lifted the can, and saw that the bottom of the can was leaking paint.  I guess my pressing the stir stick down had broken through the rust-weakened  bottom of the can.
I cleaned up the mess I had made, and decided that even though it seemed wasteful, from now on I wasn’t going to save partial cans of paint.  We never seem to reuse it and if we do, it is often of questionable quality and most of it just ends up sitting in deteriorating cans under the house for years until it is finally thrown away.  It’s better just to throw it away as soon as we are finished with the job.