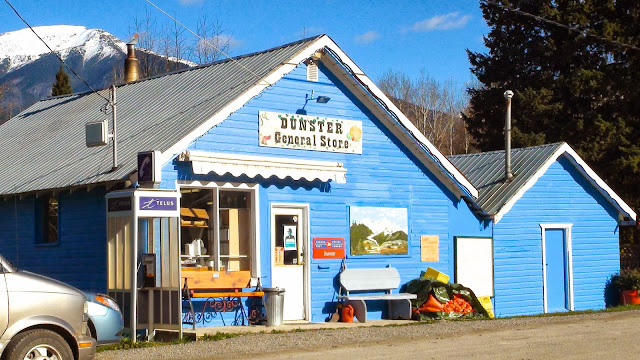 Every year millions of tourists flock to Paris and London.  The number flocking to the hamlet of Dunster, BC is quite a bit less.  Knowing that, I realized that there are probably quite a few people out there in internet land that have never been to Dunster, and since I mention it periodically in my blogs, they might be wondering what it is like.  The above photo pretty much captures it.
Downtown Dunster consists of the Dunster General Store.  There is an empty railroad station across the road, and just a short walk from the store, the Dunster Elementary school, that was abandoned by the school district.  Separated from these three buildings, and sitting across the valley on Hwy. 16 is the Dunster Community Hall.  Those are the 4 structures that come to mind when someone speaks of Dunster.
All of these buildings (except for the train station) are surprisingly full of activity, considering how small the community is.  In the store, people shop for unique groceries tailored to appeal to the organic and pure food tastes of their customers.  The store is also where residents come to pick up their mail.  It has a real old-time general store feel to it.
There always dinners, markets, and meetings going on at the Dunster Community Hall.  Just last Saturday, Joan and I attended the annual “Harvest Dinner” potluck there.  After the meal, I attended a really fine tribute to Leonard Cohen, given by a duo of very talented musicians that took place in the gym of the Dunster School.  The building was purchased by the community after loosing the fight to keep the school running the school district.
The most important thing to know about Dunster is the community spirit of it’s people.  They are always in the forefront of most of the positive and progressive things that happen in the Robson Valley, be it gardening, the environment, or music.
Dunster punches well above its weight.  While so many small communities are dwindling and being abandoned, Dunster recognizes the importance of “community” and fights to maintain it.