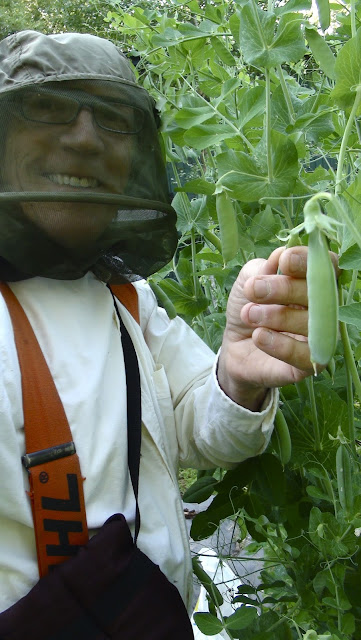 One Way The Citizens of Robson Valley

Last year in July -- when the mosquitoes are engaged in annual warfare with the residents of Robson Valley -- I submitted my description of the ancient Italian city of Paestum that has some of the best preserved Grecian ruins anywhere.  When the Greeks built the city, they created bogs in an effort to channel water, and that attracted mosquitoes.  The Greeks abandoned the area due to the mosquito infestation; the Romans (who loved Greek culture) moved in and took over; they couldn't stand it either; and they left.  Thus, the temples are well-preserved since humanity avoided them for centuries.

Never forget, in all that follows, mosquitoes carry diseases.  The Paestum mosquitoes were more than just pests for the Greeks and Romans: they were death.  However, at that time, people didn't know that mosquitoes could be deadly.  They blamed diseases like malaria on miasma or "bad air."

The history of Paestum where mosquitoes played an important role is not a rarity.  Throughout the story of human life on Earth, mosquitoes have influenced history.

Take, for example, the United States' Civil War.  When the war began and Union soldiers were starting to go into the woods and swamps of the South, they had less resistance to mosquito-borne diseases than the Confederate soldiers, and the Union ranks were lessened and weakened by malaria and other diseases.  However (and to prove that mosquitoes can be turn-coats as well as pests), later in the war, the Union had much greater access to quinine (the malaria treatment of the time), so the tables were turned.  Also and lest we forget, twice as many soldiers died from diseases like malaria in the Civil War than died from battlefield wounds.  For every soldier killed in battle, there were two who died of diseases.

Did you ever wonder why the city state of ancient Athens would sometimes be easily victorious in one battle and be easily defeated in another battle?  Part of the reason was mosquito-carried diseases.  One of the factors in doing battle BC/BCE was how many men of fighting age were well enough to fight.  It was the same with the Romans.  A malaria plague in 5th century Italy is thought to have contributed to the fall of Rome.  Think of it: if you were intent on besieging and conquering Athens or Rome and if you were patient, you could wait for a summer infestation of mosquitoes to decimate the place.

Much of the reason for the African slave trade in the United State was the result of the mosquito-borne diseases brought into the Americas.  In pre-Colombian times, there were very few domesticated animals, by far the greatest source of what would (and will) become diseases that effect humans.  Europeans came to the Americas; they brought animals and diseases with them, and -- through mosquitoes -- the diseases were contracted by the indigenous peoples who died 'en masse.'  The Europeans had enslaved many of the native people, and -- when enough had died that the diminished workforce effected production -- the natives of Africa became the source of slave labor.

"But those times were long ago," you're thinking, "Nothing like that happened in modern times."  Right?  Wrong.  In WWII, the Germans re-flooded the Pontine Marshes to increase malarial mosquitoes to be used as weapons against the Allies.  In the Battle Of Anzio, the number of Allied soldiers who contracted malaria was far above the average.